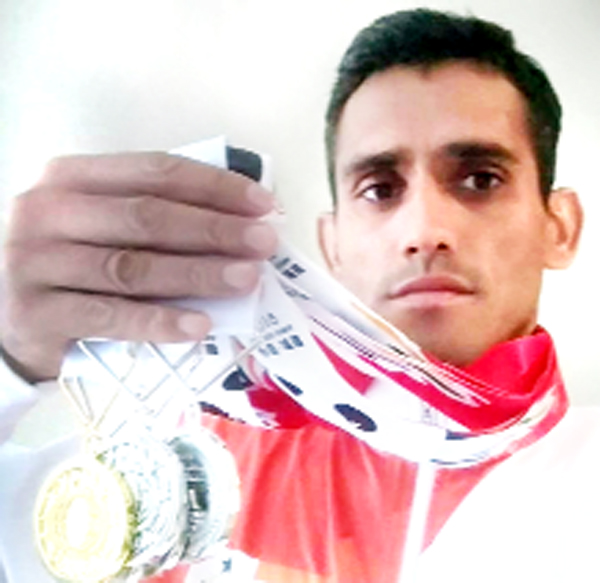 JAMMU, Aug 21: Hailing from a remote village Chunera, Mahanpur in district Kathua, BSF personnel Radhey Kumar created record in World Police and Fire Games held at Chengdu in China.
The 38 year ace athlete kept the Indian flag high by winning 1 gold, 4 silver and 1 bronze medal in these Games. Radhey won gold medal in 21 kilometres Half Marathon, while he clinched silver medals in 5 kms Track & Field, 10 kms Marathon, 10 kms Cross Country and 5 kms Run.
Radhey, who has been part of BSF Central Sports team since 2003, has the distinction of creating records in Marathons, Half Marathons, Cross Countries and other allied Runs.
Apart from winning a galaxy of medals in the National and International events, the iconic athlete has the honour of emerging as the Indian winner in the prestigious ‘Wings for Life World Run 2015’. He had distanced 55.2 kilometres to become the Indian champion.
Radhey was the winner of 75 Kms Hell Run 2019, completing it in 9 hours, 13 minutes and 6 seconds, with Santhosh Gowda and Vishwas Gaikwad claiming 2nd and 3rd spots respectively.
Radhey Kumar was the part of the 5-member Indian team for the Trial World Championships held in the month of June this year. The Indian team for this event comprised of Kieren Dsouza, Tlanding Wahlang, Radhey Kumar, Rajasekar Rajendra and Narayana. J&K’s Radhey bagged 3rd spot in this event.
Though, son of a farmer Uttam Singh and Shani Devi, Radhey has been creating records and winning laurels for his Country, State and his Organisation/Department-BSF by participating in high profile running events held across the globe, but he is yet to be honoured by the State of Jammu and Kashmir for all his achievements.
“He leaves no stone unturned in keeping the country’s flag high at the International level. He is passionate to run long distances and create records. Despite all the hardships, Radhey manages to take part in bigger events at his own. He deserves a better deal,” said his brother Rakesh while talking to EXCELSIOR.
The sorry state of affairs is that the family, especially the children of this heroic sportsperson are at the receiving end as far as their schooling is concerned. His kids Tanisha and Vanisha have to travel long distances by foot from their village Chunera to reach their school at Mahanpur in Kathua.
“The Governor Satya Pal Malik led State Administration, which is keen to promote sports and sportspersons in the State, needs to honour this ace sportsperson for his outstanding contribution in the field of sports. The families of such athletes need to be backed to help them devote the requisite time for flourishing at the higher levels,” said an Athletic Coach while expressing sympathy towards Radhey’s family.
When contacted Radhey Kumar, who has returned from China yesterday after his great show said that he felt ecstatic for his brilliant performance in World Police and Fire Games, adding that he along with other top BSF athletes called on the Director General today, who felicitated them and lauded their efforts for good show in World Police and Fire Games.
He further said that he belonged to a remotest area of Kathua district where the sports infrastructural facilities are almost absent, adding that the youth of such areas possess natural sporting talent which needed to be honed in order to help them not to derail from the mainstream and not to fall prey to drug menace and other social evils.
Radhey advocated for developing sports infrastructure in hilly areas to help the State to produce International stuff.
He also said that the athletes from other States like Haryana, Punjab, Uttarakhand, Kerala and Maharashtra are being provided with big awards and rewards for their achievements, however, such custom is not in practice in our State.
He batted for providing financial assistance to top sportspersons of the State for helping them to blossom at the higher levels.