JAMMU, Sept 3: After three days of great enthusiasm, heated debates and parliamentary diplomacy, Jodhamal Youth Conclave concluded with a wave of firm conviction that now is the time for the youth to build human solidarity around the world with not only the nation but the world at peace not in pieces.
Arvind Jasrotia, Director of The Law School, Jammu, was the chief guest on the closing ceremony, who appreciated the effort being put up by the students and the faculty of Jodhamal Public School to inculcate the feeling towards Nation at peace not in pieces while also talking about some of the critical agendas chosen by the JYC Directorate.
Over more than 300 delegates in this year’s JYC discussed on distinct agendas from social agendas like “consent as a constitutional right” to volatile agendas such as ‘role of AFSPA in Kashmir’.
Vaidehi Mattoo, Srishtri Manawa, Dhruv Gandhi of Jodhamal School, Agastaya Rana of DPS, Jammu, Kounen of Burn Hall School, Kashmir, Suhani Rajput, Vanshi Dhar of KCIS, Prachi Atri, Syesha Ganjoo of GD Goenka, Jammu were adjudged as the best delegates.
The outstanding delegates were awarded to Vanshika Sharma, Malvika Jain, Aasmi Abrol of KCIS, Hanan Khalil of GD Goenka, Shireen Kalra of Presentation Convent, Atharav of Heritage School, Amber, Niyati of Jammu Sanskriti and Abhijot Singh (individual). The Honourable mention were awarded to Akhilesh Magotra, Jayesh Singh, Varinda Salgotra, Samreen Fatima of KCIS, Seerat Virk, Arya Mahajan, Samarth, Pranav, Anant Maini of JMPS, Aasim-ul-Haq, Aaryan of Heritage School, Himanshu Bhardwaj of Jammu Sanskriti, Annanya Sangra of Presentation Convent School, Siddhant Gupta of Scindia School, Gwalior, Mannan Kalil of GD Goenka and Parth Anand (Individual).
After witnessing the amazing performance by the school Rock Band and an extravagant dance party on the second day, all the delegates were also a part of the War Cabinet – the first ever Joint Crisis Committee in the history of Jammu and Kashmir with 300 delegates and 8 Executive Board members.
In the war cabinet, the delegates were successful in protecting the territorial sovereignty of India.
In the ending video, the delegates took a pledge of working towards a better legacy of youth, which was followed by the hyped first look of The Historic Cabinet-Maharaja Hari Singh’s Cabinet. 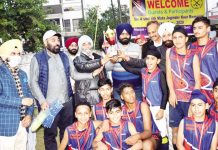 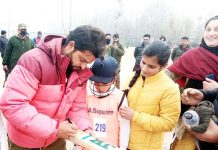 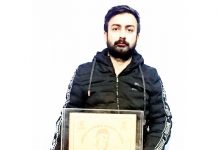 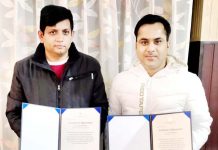 Office bearers of JKTA get letters of appreciation

India have unbelievable bowling attack, want to put them under pressure: Head