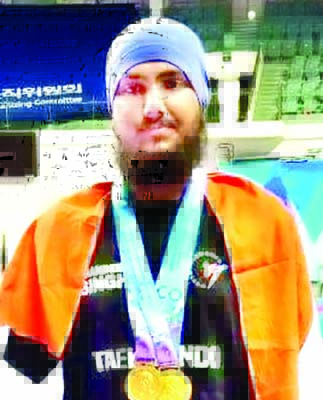 Excelsior Sports Correspondent
JAMMU, Aug 11: Jammu and Kashmir’s ace Para athlete, Chandeep Singh, despite all odds, converted his disability into an ability to emerge golden boy of the country and the State as well by winning 2 gold medals for India in the ongoing Kimunyong Cup Taekwondo Championship, being held in Korea.
Chandeep has the honour of winning gold medals in Asian Taekwondo Championship at Vietnam and Kathmandu Kyorugi & Pomsae International Taekwondo Championship at Nepal.
Having won medals at the International level in Taekwondo, Chandeep has the distinction of being adjudged as the World’s Fastest Skater by US based Golden Book of World Records as also by the Assist Book of World Records. Chandeep has a long journey of excellence in sporting world as after shining in football, athletics and skating at school, zonal and national levels, he has the distinction of winning big haul of medals in Taekwondo at the International level.