E-Paper
Home sports news It was instinctive, don’t know from where understanding of spirit comes:... 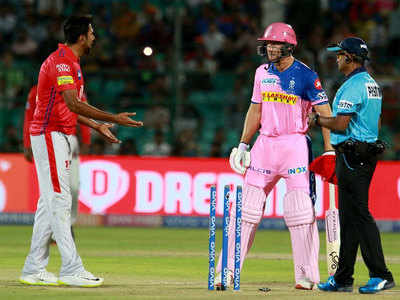 Unapologetic about ‘Mankading’ Jos Buttler in an IPL match here, senior Indian off-spinner Ravichandran Ashwin said his decision was “instinctive” and cricket laws should be reconsidered if what he did was against the ‘spirit of the game’.
Kings Xi Punjab captain Ashwin, in a match against Rajasthan Royals on Monday, ‘Mankaded’ rival batsman Jos Buttler, triggering a debate on ‘spirit of the game’.
In a first in 12 editions of the IPL, Ashwin ran out a rampaging Buttler, who was at the non-strikers’ end, on his delivery stride in the 13th over, an action popularly known as ‘Mankading’. TV replays showed that Ashwin had waited for Buttler to move out of the crease before removing the bails.
“Look it was very instinctive. It wasn’t planned or anything like that. It’s there within the rules of the game. I don’t know from where the understanding of the Spirit of the Game comes,” Ashwin said at the post-match press conference.
The mode of dismissal is permissible as per ICC Rule 41.16 of playing conditions, according to which there is no need to warn the batsman as was the case in earlier times.
“Naturally if it’s there in the rules, it’s there. Probably, we need to go back to the rules,” India’s premier Test spinner said.
When reminded of a past incident when former West Indian skipper Courtney Walsh let off Pakistan’s Saleem Jaffer in crucial 1987 World Cup match at Lahore in a similar situation, Ashwin retorted sharply.
“Neither was Jos Buttler playing then nor was I playing. So it is very very pertinent to just not compare two people,” he said.
When probed further on whether it affects the ‘spirit of the game’, the irritation was palpable on his face.
“I don’t understand the point because it’s rules. What applies for one man doesn’t apply for everyone else?” he asked.
There has been a debate whether Ashwin deliberately delayed while loading up on his delivery stride having apprehended that Buttler backs up too far.
“I didn’t even load and he left the crease. It’s always been my take on the crease, because it’s my half of the crease,” he said.
The Kings XI skipper lauded his bowlers for bringing the team back into the contest.
“We all know that after six overs it is going to slow down. Credit to bowlers on how they bowled. I have been working on a lot of variations, pretty happy that it came out,” he said.
“Sam (Curran) had a bad day with the ball, but he came back well. Everybody ticked their boxes. We do have a few options amongst us, but if we can have good five overs, there is nothing like it.”
Moving away from the controversy, Ashwin said the over from Sam Curran was the turning point of the match.
“The over from Sam Curran and then of Mujeeb Ur Rehman was the turning point, we grabbed two-two wickets in them. The asking rate comes down to below 10 and as far as I remember, the Royals needed 37-38 runs from four overs. The game was very much in their hands but the four quick wickets brought us back into the game,” said Ashwin.
“The surface got better when they were batting. The ball was holding on when we had batted,” he added.
Man-of-the-match Chris Gayle, who hit 79 off 47 balls, said he was happy with his form.
“This is a big ground to be honest. I have been in a good form, so it was good to start on a winning note. Sarfaraz (Khan) got some runs today, which was really good.
“One thing we discussed before the tournament was to win this IPL for the Universe Boss (referring to himself) and the youngsters have got my backing,” he signed off. PTI

We have asked every state to adopt one sport: Rijiju