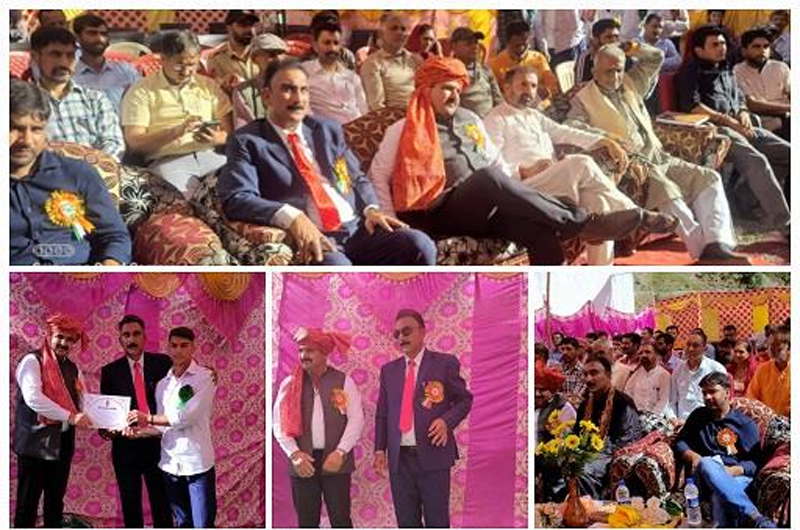 Excelsior Correspondent
DODA, Sept 24: Government Higher Secondary School Dessa, Zone Bhagwah Doda today celebrated its first Annual Day by organising a grand function on the School Campus.
Chairman DDC Doda, Dhananter Singh Kotwal was the chief guest, while ACD, Doda, Fulail Singh was the guest of honour.
The function started with the lighting of the traditional lamp by the chief guest and guest of honour along with the School Principal, Dr. Kailash. K. Chander and staff members, which was followed by welcome song and Ganesh Vandana to invoke blessings from almighty.
A variety of cultural items was presented by the students, which was highly applauded by the audience.
Principal of the school presented an annual report through a powerpoint presentation highlighting regular academic and co-curricular activities organised during the previous year.
Speaking on the occasion, the chief guest stressed on imparting moral education to the students. He lauded the Principal for his tireless efforts in changing the education scenario of the school.
On the occasion, the meritorious students of the school were awarded with trophies by the school management.
Certificates and prizes were also presented to the best performing teachers, Brijeshwari Rakwal, incharge cultural cell, Mahaveer for sports and Ramzan for punctuality. Besides, other staff members from the cluster schools were also felicitated.
ACD, Doda, BDO Bhagwah and Principal also spoke on the occasion.
Brijeshwari Rakwal carried out the proceedings of the programme and Ushma Kumari, Lecturer Chemistry presented vote of thanks.

Gujarat Assembly poll results: BJP shatters all electoral records with leads in 150 plus...