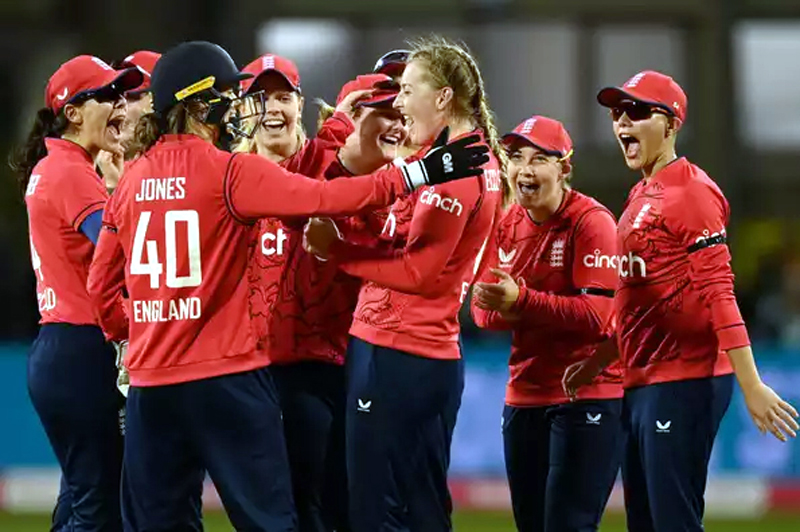 Indian bowlers put up a valiant effort with a below par total to defend before rookie Alice Capsey held her nerves to guide England to a seven-wicket win in the third women’s T20 International and also clinch the series 2-1.
India put up an inept batting performance, scoring only 122 for eight, courtesy wicketkeeper Richa Ghosh’s 22-ball 33 and all rounder Pooja Vastrakar’s unbeaten 19 off 11 deliveries.
Indian batter were unable to navigate through the England spin bowling as the trio of Sophie Ecclestone (3/25), Sarah Glenn (2/11) and Bryony Smith accounted for six wickets.
England scored the runs in 18.2 overs, courtesy opener Sophia Dunkley’s 49 off 44 and 18-year-old Caspey’s unbeaten 38-run knock that took the hosts over the line and seal the three-match series 2-1.
Chasing 123, the home side was off to a brilliant start with both openers Dunkley and Danni Wyatt (22 off 23 balls) sharing a 70-run stand before India triggered a mini batting collapse by snaring three quick wickets in as many overs.
Spin all-rounder Sneh Rana (1/32) provided the first breakthrough for the visitors as Wyatt miscued a shot.
Dunkley, who hit six fours, followed next as she was cleaned up with an excellent delivery by Vastrakar (1/16). Captain Amy Jones’ (3) stay in the middle was then cut short by Radha Yadav (1/14).
But, Capsey, considered one of England’s brightest young talents, continued to attack and played shots all around the ground. She was ably supported by Smith, who remained unbeaten on 13, as the two steered England to victory.
Earlier, India were in all sorts of trouble as they slipped to 75 for 7 before Ghosh and Vastrakar joined forces to take the visitors to a respectable total.
Both openers, the big hitting Shafali Verma (5 off 12) and Smriti Mandhana (9 off 8) were dismissed in the first four overs.
Verma was first to go as she misjudged the pace of the delivery by Issy Wong (1/24) with the ball deflecting off her pads on to the wicket.
Smith then got the prized wicket of Mandhana as Ecclestone held on to a brilliant catch.
Brief Scores:
India Women: 122 for 8 in 20 overs (Richa Ghosh 33 not out, Deepti Sharma 24; Sophie Ecclestone 3/25)
England Women: 126 for 3 in 18.2 overs ( Sophia Dunkley 49, Alice Capsey 38 not out; Radha Yadav 1/14). (PTI)