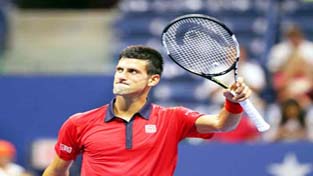 Miami, Mar 25:
Novak Djokovic remains on course for a record seventh Miami Open title, but the world number one admitted to a loss of focus in a 7-5, 4-6, 6-1 victory over spirited Federico Delbonis which booked his place in the last 16.
Djokovic is hoping to eclipse Andre Agassi’s six ATP crowns in South Florida over the next week and although the 31-year-old endured some shaky moments at Hard Rock Stadium, he still possessed enough quality during the key moments to see off the battling Delbonis.
The Serbian, though, wasn’t happy with letting a 5-2 advantage slip in the first set and became furious with himself as the second squirmed from his grasp.
He will need to tighten up his game if he is to reach next Sunday’s final with Roberto Bautista Agut waiting in the fourth round after the Spaniard defeated Italian Fabio Fognini 6-4, 6-4. (Agencies)