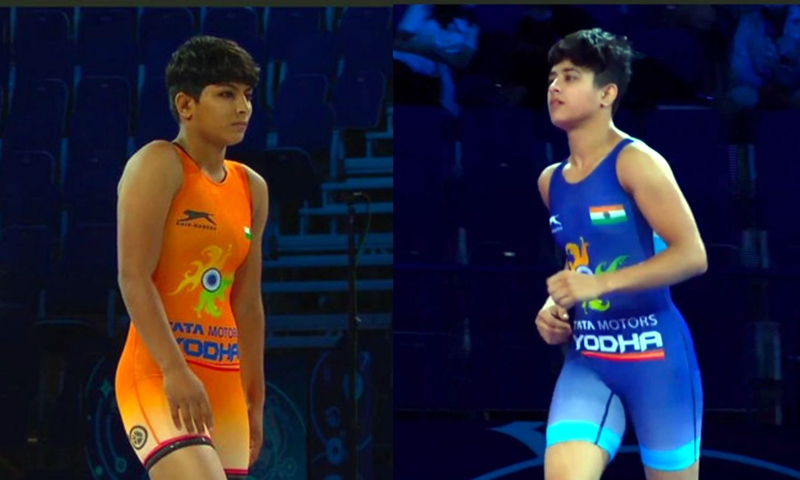 UFA (Russia), Aug 19: Outclassed in the final, Bipasha (76kg) had to be content with a silver medal but a tenacious Sanju Devi kept her cool and relied on her stamina to secure a place in 62kg title clash at the Junior Wrestling World Championships, here on Thursday.

Simran (50kg) and Sito (55kg) won bronze medals to add to India’s tally but Arju forfeited her 68kg bronze play-off due to injury.

Bhateri also made her way into the 65kg final while Saneh will fight for bronze after losing her 62kg semifinal.

Sanju emerged star of the day for India. She may not look athletic but was quick with her moves and reflexes as she beat Germany’s Lusia Schrel 5-2 and then erased a 0-3 deficit to edge past Croatia’s Iva Geric 4-3 in the quarterfinals.

In the semifinal too she was down 0-5 but relied on her supreme stamina to win 8-5 against Azerbaijan’s Birgul Soltanova, who lost a bit of steam towards the end and blew away her lead.

She will fight for gold against Russia’s Alina Kasabieva.

Also moving to the final was Bhateri, who had just two bouts to win in 65kg to make the final. Both her bouts were low-scoring as she just about managed to get the points that were enough to win. She beat Tunisia’s Jlassi Khadija and Romania’s Amina Roxana Capezan.

She is now up against Irina Ringaci from Moldova.

Simran took 50kg bronze with a come-from-behind 7-3 win over Belarus’ Natallia Varakina, who led finished the first period with a 3-0 lead but could not get a single point in the second.

Simran not only found point-scoring moves, she also defended well to emerge winner.

Sito was dominant in her 55kg bronze play-off as she secured the medal with a technical superiority win over Turkey’s Melda Derenkci.

Kusum (59kg) though could not never get that one move that would give her points, losing 1-2 to Azerbaijan’s Aliyeva. She defended well but that was no enough to win the match.

Saneh (72kg) hardly had any problem in dispatching Kseniya Patapovich of Belarus 6-2 in her opening round and remained untroubled against Mongolia’s Tsogzolmaa Dorjsuren, winning 7-0.

Saneh’s four-pointer on a double-leg attack stood out.

However she was blown away by American Kennedy Alexix Baldes, who pulled off a grand amplitude throw at the beginning to stun the Indian and won by technical superiority.

In other matches involving Indian girls, Pinki (53kg) made a promising start to lead 5-4 and 7-6 with a terrific four-point throw but Turkey’s Emine Cakmak never looked jittery as she pulled off timely take-down moves to snatch the bout with a 12-7 scoreline.

Mansi, competing in 57kg category, began with a confident 16-4 win over American Claire Marie Dicugno but was outplayed by Turkey’s Elvira Kamaloglu 1-9 in the quarterfinals.