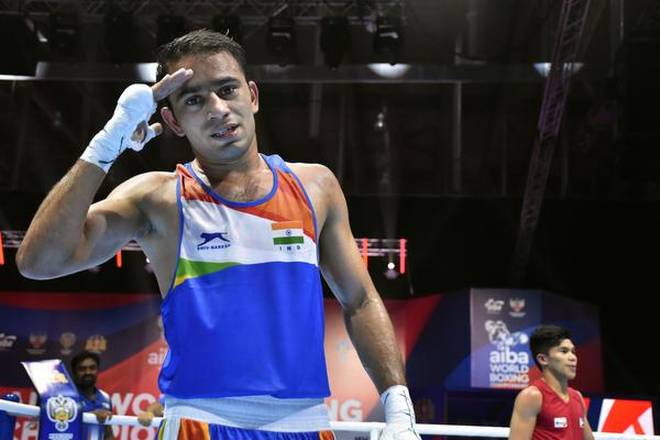 In a letter to the Minister, Panghal, who became India’s first male boxer to win a world championship silver last year, said that athletes should not have to plead their case for an award by nominating themselves.

“The current process is that a sportsperson has to send application and then sports committee selects on the basis of these applications. Award selection is also based on discriminative decision of sports committee members who hold no accountability,” he said in the letter.

Panghal has been nominated twice for the Arjuna award but has not been considered because of the past dope violation, which took place when he underwent treatment for chicken pox in 2012.

The process to pick this year’s national sports awardees has already started and the last date of filing nomination has been set at June 3.

“Sports Ministry and Sports Authority of India (SAI) has all the data, they know who is deserving and who is not,” Panghal told PTI while speaking about his reasons for writing the letter.

“If not this year, then may be next year, change has to come at some point,” he added.

After nominations, a panel selected by the sports ministry finalises the winners based on a points system in which the Olympic and world championship medals get maximum weightage.

“The Army is pushing my case this year and I hope the dope violation won’t come into the picture because that was an inadvertent intake at the youth level. I have been performing consistently, I do deserve to be considered,” said Subedar in Indian Army.

Self-nomination or nomination by the national federations, sports boards and past awardees are the first step in the process.

“This process is not transparent and there are many examples where a deserving sportsperson has to go to courts to claim awards. This is very uncomfortable for sportspersons as well as for sports administration,” he said.

The 24-year-old Commonwealth Games silver-medallist is by far the most successful in Indian boxing right now but is unlikely to be considered even this year as the criteria does not allow for dope-tainted nominations.

“Most of the prestigious awards in the world have been given without asking for nominations as in true spirit, an award is a recognition of achievement of sportspersons.

“This (the current process) resembles an old system from the British era when achievers have to apply for an award. By making this award nomination-free, you will be making a solid change in sports system of India,” he said addressing Rijiju.

“It is a humble request to consider this change and I will be highly indebted to you,” he added. PTI