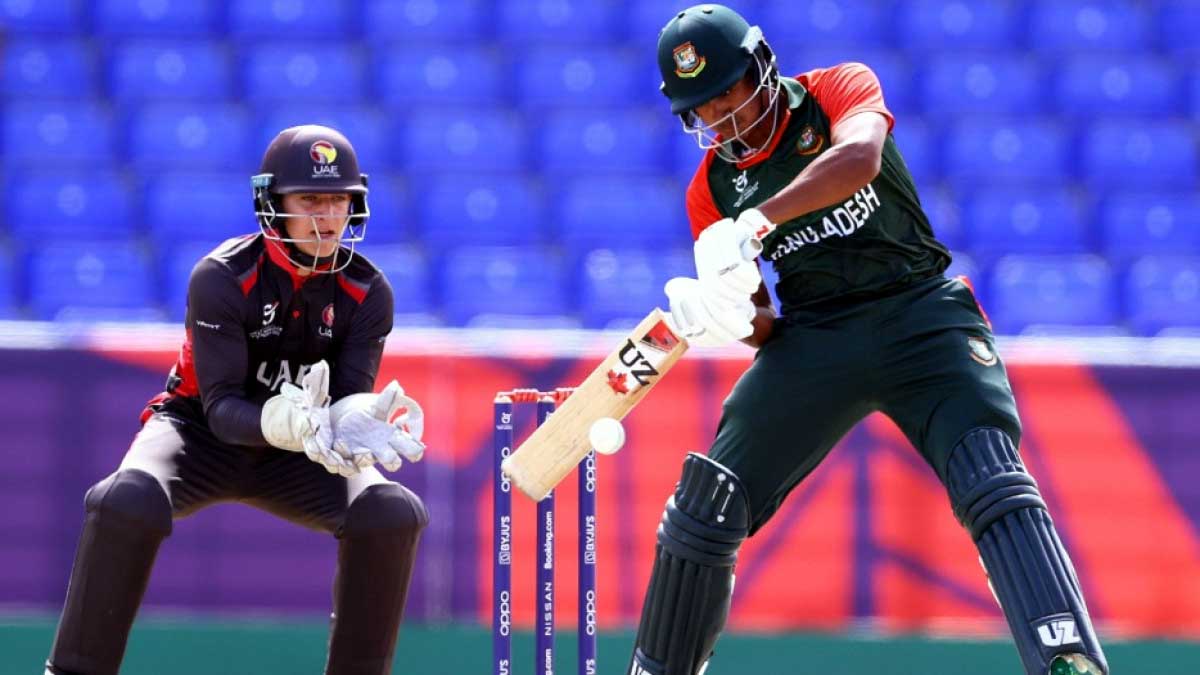 Basseterre, Jan 23: Defending champions Bangladesh triumphed in a winner-takes-all game as they beat the UAE by nine wickets via the D/L method in a rain-interrupted match to reach the quarterfinals of the U-19 World Cup.
Bangladesh’s bowlers worked in tandem to restrict the United Arab Emirates to 148. The defending champions then overhauled the target with 61 balls to spare on Saturday.
Put in to bat, the UAE slipped to eight for two inside three overs. Dhruv Parashar and captain Alishan Sharafu then combined to steady the ship for the UAE putting on 44 runs for the third wicket.
Punya Mehra then top-scored with 43 but could not find a partner to stay with him as the final seven wickets fell for 98 runs.
Ripon Mondol returned Bangladesh’s best figures taking 3-31, with three other bowlers also coming away with dismissals.
Chasing 148, Bangladesh made a commanding start reaching 86 before losing their first wicket.
Hossain had added 37 runs, with fellow opener Mahfijul Islam putting on 45 runs before the players were taken off the field due to rain.
Mahfijul was able to reach his half-century as the teams emerged with a new target of 107, the opener eventually reaching 64 not out, as Prantik Nawrose Nabil joined him in the middle as they sealed the victory and safe passage to the knockout stages.
Bangladesh will be hoping for a repeat of the final last time out when they face India in the quarterfinal on January 29.
In another match, skipper Suliman Safi’s century helped Afghanistan to a 109-run victory over Zimbabwe in the final game of Group C to earn a quarterfinal tie with Sri Lanka.
The Afghanistan captain put on 111 from 118 balls, including 14 fours and three sixes, to move Afghanistan to 261 for six as he was dismissed on the final ball of the innings.
The Afghan bowlers led by spinner Nangeyalia Khan (4/30) bowled out Zimbabwe for 152 in 36.4 overs.
Alex Falao was the pick of the bowlers for Zimbabwe as he took three for 54 from his ten overs to move on to eight wickets for the tournament so far.
In reply in Diego Martin, Zimbabwe opener Matthew Welch led the charge with Steven Saul contributing nine to the score before being given out leg before wicket to leave his side on one for 49.
After Welch’s fell having made 53 from 61 balls, no one else was able to continue the run-scoring going as the required run-rate climbed above a run and ball and wickets kept tumbling. (PTI)