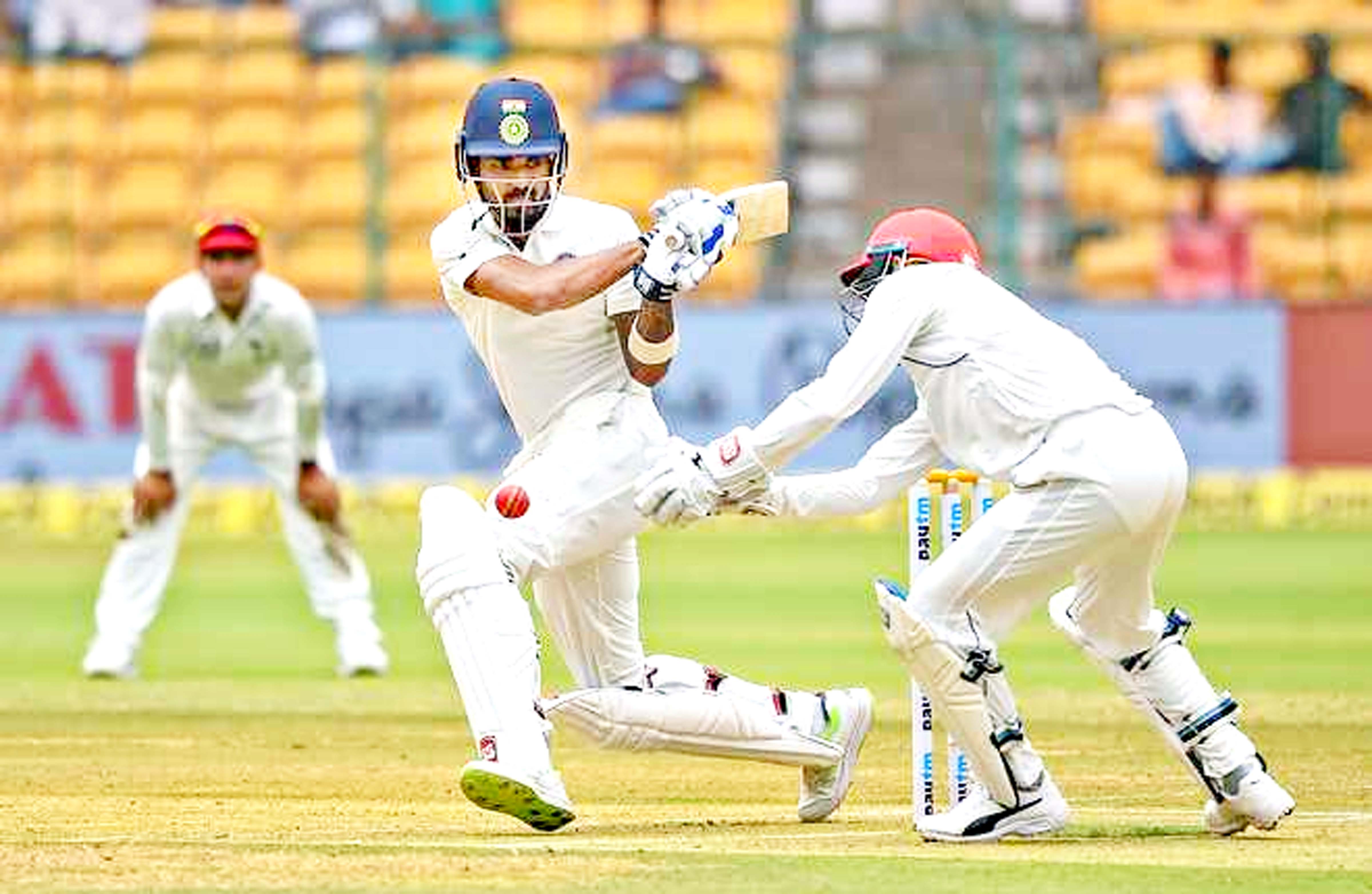 BENGALURU, June 14:
Hundreds from Shikhar Dhawan and Murali Vijay gave Afghanistan the expectedly tough initiation into Test cricket but the debutants managed to find their bearings to leave India a tad uncomfortable at 347 for 6 on a rain-curtailed first day of the historic one-off Test here.
Dhawan (107 off 96 balls) bludgeoned the rookie Afghan bowlers into submission with a single session century while Vijay grinded them with a compact 105 off 153 balls as the duo smashed 168 in only 28.4 overs.
However, the world no.1 hosts did take their foot off the pedal in the final session losing five wickets for 99 runs in 32 overs. The result was that the day end scorecard didn’t paint a sorry picture for Afghanistan something that was threatening to happen after the first two sessions.
The final session definitely belonged to Afghanistan as their bowlers put up an inspired performance backed by the fielders.
Vijay and a well-set KL Rahul (54 off 64 balls) were removed in quick succession by the impressive pace duo of Yamin Ahmadzai (2/32 in 13 overs) and Wafadar (1/53 in 15 overs).
The Vijay-Rahul second wicket partnership yielded 112 runs but their dismissals brought about a collapse.
Skipper Ajinkya Rahane (10 off 45 balls) and Cheteshwar Pujara (35) couldn’t maintain the momentum giving the visiting team bowlers something to cheer about in the final session.
Rahane became Rashid Khan’s maiden Test scalp while Mujeeb ur Rahman got Pujara caught at leg-gully with one that spun in sharply.
Comeback-man Dinesh Karthik (4) was run-out needlessly as a solid foundation laid by the openers was wasted by the middle-order.
Rashid (1/120 in 26 overs) conceded a ‘century’, getting a reality check on the enormous gulf between T20 and Test cricket during the first two sessions.
However, being a quick learner, he came back well in the final session varying the pace of his deliveries and getting the ball to dip in troubling the middle-order with a final spell of 9-2-15-1.(PTI)

Earlier, Dhawan became the first Indian batsman to score a century in the first session of a Test match joining the illustrious ranks of Sir Don Bradman, Victor Trumper, Majid Khan, and David Warner.(PTI)
The hapless bowlers struggled during the first two sessions as they were not able to hit the correct ‘Test match length’, especially the spinners, who are used to bowling flat and quick.
Afghanistan coach Phil Simmons’ statement about “not knowing what it’s all about till you get there” seemed prophetic as the talented bunch of cricketers got their introductory lessons in red ball cricket from two openers, who have played 85 Test matches between themselves.
Rashid, the reigning crown prince of 24-ball spells, received a harsh treatment from Dhawan, who smacked him for three boundaries to complete a half-century in 47 balls.
Dhawan also hit a flowing cover drive off Rashid to complete his sixth Test hundred off 87 balls as Vijay also frustrated the minnows with his watertight technique.
Call it irony, Dhawan stepped out to hit straight sixes off Afghanistan’s three IPL participants – Rashid, Mohammed Nabi and Mujeeb ur Rahaman with effortless ease.
In all, Dhawan hit 19 boundaries and three huge sixes before Yamin Ahmedzai picked him with a perfectly pitched delivery that moved a shade away after pitching. Mohammed Nabi, in the slips, pouched it after his skipper Ashgar Stanikzai fumbled on the first attempt.
The moment Rashid or Mujeeb (1/69 in 14 overs) tried to flight, Dhawan would step out, if they upped the pace of the deliveries, they were cut forcefully.
At the onset, opening bowler Ahmadzai bowled a few sharp outswingers before leaving the field with a muscle pull. He did comeback at the stroke of lunch but left after another four-over spell in which he got Dhawan’s wicket.
During the final session, he also got Rahul, who dragged a delivery back onto his stumps.
The other new ball bowler, Wafadar was angling it across the left-hander and Vijay faced him more to wear him out and take advantage of the spinners.
While Dhawan was more forceful in his strokeplay, Vijay was more silken in his drives. The shot of the day would certainly be a backfoot square drive off Wafadar.
Vijay’s innings had 15 boundaries and a six. He completed his 12th hundred with a lofted shot over point off Wafadar.
However, the young pacer had the last laugh when he got one to jag back as Vijay shouldered arms and was adjudged leg before.
While watching Rashid bowl during the pre and post lunch session, it seemed as if Kevin Pietersen’s Pataudi memorial lecture was being played on the background.
“T20 offers cricketing buzz without the full sting. Wickets are less precious. Risks are taken without same downside. There is less character and technique required.”
Rashid understood it the hard way. Initially, he was relying too much on the quicker deliveries but missing the length time and again meant that he was carted on all sides of the wicket.
Once the openers were gone, Rashid found his mojo and got to land his googlies consistently on good length troubling the middle order batsmen. (PTI)

Formal Order Should Be Issued By Raj Bhavan To Spare Poor From Anti-Encroachment Drive...

Officials, Team Of GSI Arrive In Doda After Cracks Appeard On Houses