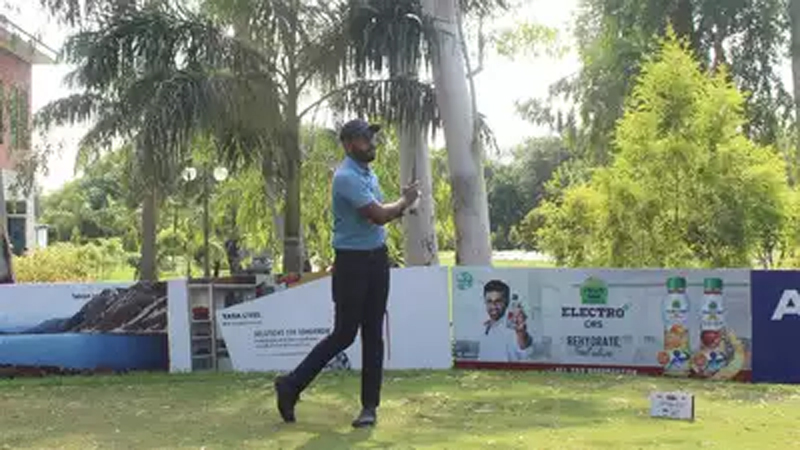 Excelsior Sports Correspondent
JAMMU, Sept 9: Yuvraj Singh Sandhu dominated round three with a fabulous seven-under 65, the tournament’s best round so far, to race into a commanding four-shot lead at the J&K Open here today.
Chandigarh’s Yuvraj (69-70-65), a three-time winner on the PGTI, had a three-day total of 12-under 204. He thus moved up one spot from his overnight second position.
Sandhu’s nearest challenger was Bengaluru’s Khalin Joshi (70-68-70), the halfway leader, who struck an error-free 70 today to be placed second at eight-under 208.
The rest of the field were at quite some distance from the top two as Hyderabad’s Mohd Azhar (70), who had the only other bogey-free round of the day, along with Gurugram’s Veer Ahlawat (72), had the next best total as both were tied third at two-under 214.
Among the prominent names, Manu Gandas was tied ninth at two-over 218, Rashid Khan was tied 14th at four-over 220, Udayan Mane was tied 23rd at six-over 222 and reigning champion Honey Baisoya was tied 30th at eight-over 224.
On a day that witnessed just four under-par scores, Yuvraj’s dominant display helped him charge ahead of the rest as he sank eight birdies and a bogey.
After his early bogey on the third, Yuvraj, currently placed second on the PGTI Order of Merit, made amends with birdies on the fifth, sixth and eighth where he sank a couple of putts from a range of seven to 12 feet.
Yuvraj, who found more fairways on this narrow layout in round three as compared to the previous two days, fared even better on the relatively tougher back-nine.
His back-nine birdies featured three conversions from 10 to 18 feet, an exceptional bunker shot that set up a tap-in on the 12th and a four-feet conversion on the closing 18th.

Our heritage is not only our identity but also connects our past to future...