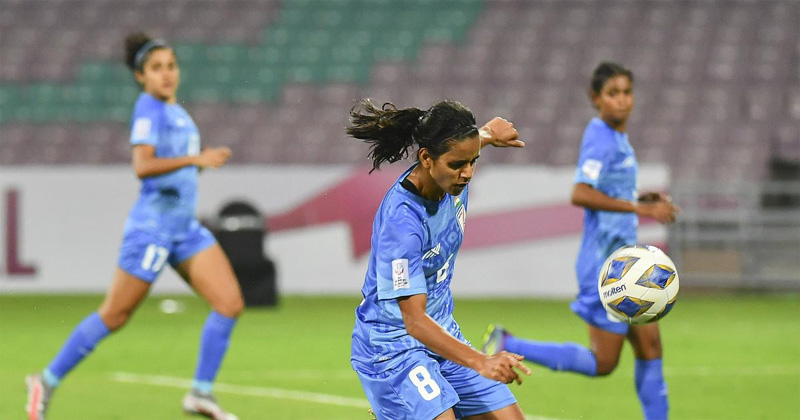 New Delhi, Jan 24: For a bunch of Indian women football players hailing from humble backgrounds, life in the last one year has revolved around playing in the AFC Asian Cup and with that taking a shot at the elusive FIFA World Cup but that dream lay shattered after COVID-19 knocked them out of the tournament.
From captain Ashalata Devi to the youngest in the squad, Hemam Shilky Devi, the Asian Cup was a once in a lifetime opportunity and all of them were looking forward to qualify for the quarterfinals, which would have also taken them to the 2023 World Cup, before they were left “heartbroken”.
If not a World Cup berth, they would have made it to the intercontinental play-offs which would have been historic in Indian football.
But it is now in the realm of ‘ifs’ and ‘buts’ after 12 players tested positive for the virus and the match against Chinese Taipei was called off. The Asian Football Confederation on Monday confirmed that India are deemed to have withdrawn from the continental showpiece.
“Absolutely devastated,” said senior player and goalkeeper Aditi Chauhan aptly capturing the sentiment within the squad right now.
“In the last one year, our lives have revolved around the Asian Cup. Our sole aim was to qualify for quarterfinals and take a shot at the World Cup,” said another player.
“We are extremely sad and disappointed at the moment. But it is not the end of the world and the hope that we will get chances to achieve this in future if we keep on doing well is giving us solace.”
Many of the players have fought tremendous odds to reach at this level.
Some took up to the sport as it was “cheaper” to pursue while others had to go against the will of their parents and community. Skipper Ashalata faced opposition from her family.
Ditto was the case of Shilky, who is all of 16 and had the distinction of being the tournament’s youngest player.
The journey wasn’t easy for any of them and this setback is definitely going to cause turmoil in their minds.
No player is allowed to speak to the media without permission and it is learnt that each of them has been told to stay in their hotel rooms without mingling even with each other.
It is also learnt that the players have not been told who are the ones infected among them.
India failed to beat Iran in their first match but a win against Chinese Taipei on Sunday would have booked a quarterfinal berth for therm. And, it was not something which they could not have done.
The Indian team had beaten Chinese Taipei 1-0 in an international friendly in October last.
A second-place finish in the group would have set up Thomas Dennerby’s side against middle-rung sides like Philippines in the quarterfinals and avoided the top-rated teams like Japan, Australia, Korea and China.
The Indian team had been one of the most well-prepared in the tournament. Since early last year, the Indian team had played international matches in Turkey, Uzbekistan, UAE, Bahrain and Brazil.
All India Football Federation President Praful Patel had said that no bio-bubble is foolproof against COVID-19 though there are some officials who felt the tournament could have been postponed for two or three months and by that time the pandemic’s third wave would have weakened in India.
Another AIFF official said the federation had done everything it could have in terms of safety measures.
“These players are from humble backgrounds and not high profile sportspersons. They are not the type who do not follow instructions. They followed the protocols to the ‘T’.
“But somehow COVID-19 could breach the bio-bubble. It is sheer bad luck and unfortunate. People are talking what could have been done, what could not have been done with the benefit of hindsight.”
The tournament was held under strict health and safety protocols in view of the surge in COVID-19 cases in India and Maharashtra.
All the teams, who have been put up in separate hotels, were tested on arrival and they were not allowed outside their hotels — which served as bio-bubbles — till the reports came in. After that, each team was also tested every 72 hours.
Two members of the Indian team first tested positive for the virus on January 19. The home team underwent another round of tests on Friday and 12 players returned positive on Sunday. (PTI)