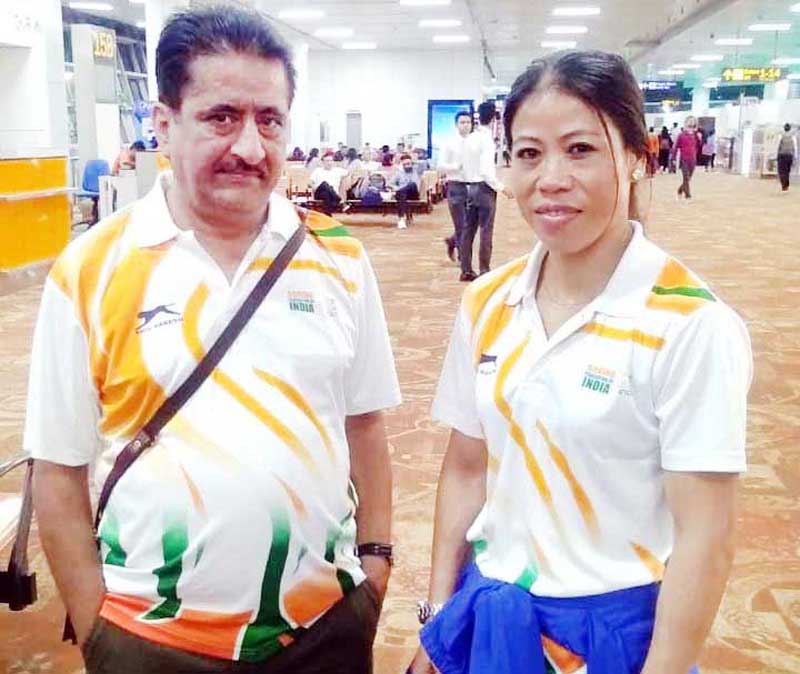 Excelsior Sports Correspondent
JAMMU, Sept 29: Veteran boxer from Jammu and Kashmir and former Divisional Officer of the J&K State Sports Council (JKSSC), Rajan Sharma, has been appointed as Manager of the Indian Elite Women’s Boxing team travelling to Russia for AIBA World Women’s Boxing Championship.
Rajan’s services have been utilized by the Boxing Federation of India (BFI) in recognition to his continued efforts to improve on technical aspects of the game and consistent efforts to meet the rising technical and competitive standards of Indian boxing.
Also general secretary of the J&K Amateur Boxing Association, Rajan has rose from a National medal winner from J&K to international technical (referee) official in his boxing career spread over 40 years.
“It was really a honour for me and state of Jammu and Kashmir that I have been assigned the prestigious task of managing the team that included Olympians and world fame boxers like Mary Kom and couple of foreign boxing coaches. I feel elated and honoured,” said Rajan Sharma in an interaction.
Before the Russian assignment, Rajan has been part of the London Olympics as technical observer, followed by the similar job at Jakarta Asian Games 2018.
As a young boxer, Rajan has won gold at Punjab Invitational Boxing in 1980 and represented J&K in the senior Nationals for five years in a row up to 1984.
Then begins his (Rajan) innings as technical official while serving as coach with the J&K State Sports Council (JKSSC).
“I have officiated in as many as 15 international events within and outside the country including Asian Junior Boxing Championship, Chemi Pokal Boxing Championship in Germany and IIIrd Commonwealth Games at Pune in 2008,” disclosed Rajan.
Rajan Sharma retired as Divisional Sports Officer of the J&K State Sports Council and now engaged as a full timer for the promotion and upliftment of sports, especially the game of boxing in J&K.