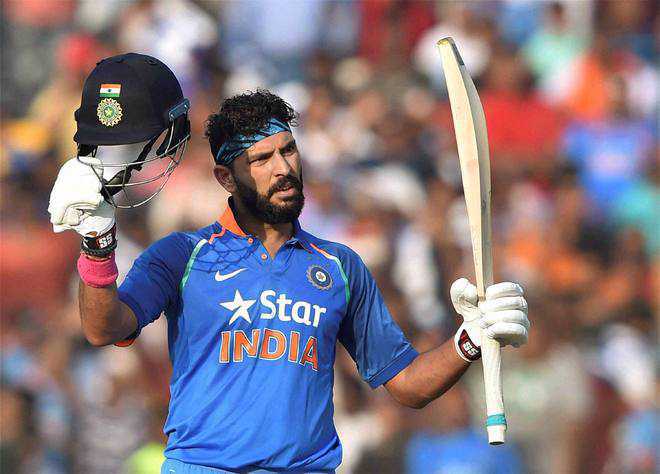 Jaipur, Dec 18: Unheralded architect-turned-cricketer Varun Chakravarthy Tuesday fetched a sensational bid of Rs 8.4 crore, more than 40 times his base price, before veteran Yuvraj Singh finally found a buyer at the IPL players’ auction that had an unmissable Caribbean flavour to it.
Chakravarthy, with a base price of Rs 20 lakh, went to Kings XI Punjab after a bidding war that also involved Delhi Capitals, Chennai Super Kings and Rajasthan Royals.
KXIP, who had the maximum money going into the auction, also spent big on England all-rounder Sam Curran, buying him for Rs 7.2 crore, the most for an overseas player today. Colin Ingram was the second-highest paid overseas player with Delhi Capitals shelling out Rs 6.4 crore for the South Africa wicket-keeper batsman.
Yuvraj fans must have also heaved a sigh of relief when the 37-year-old was bought by Mumbai Indians for his base price of Rs 1 crore after going unsold initially.
Yuvraj secured a last minute deal but his IPL fortunes have been declining rapidly. In 2015, he fetched a record Rs 16 crore deal with the Delhi franchise but was picked up by KXIP at his base of price of Rs 2 crore last season before the team released him.
Both uncapped and capped Indians were in demand at the auction. Medium pacer Jaydev Unadkat became a millionaire once again with a Rs 8.4 crore bid from Rajasthan Royals but the spotlight was firmly on Chakravarthy, the 27-year-old mystery spinner from Tamil Nadu who gave up a career as freelance architect to pursue cricket.
“We had to wait and see how the bid was going (for Chakravarthy). He can bowl in the Powerplay and in the death and can also bat,” said KXIP coach Mike Hesson.
Chakravarthy has risen to prominence owing to a strong showing in the Tamil Nadu Premier League. He has been widely credited for Madurai Panthers maiden TNPL title win this year.
Unadkat, on the other hand, is back in the RR fold after being released at the end of the 2018 season. He had been bought for Rs 11.5 crore by RR earlier this year. On Tuesday, the Royals lapped him up him after a bidding battle with KXI, CSK and Delhi Capitals.
Besides Chakaravarthy, the other uncapped players who attracted huge amounts were 16-year-old all-rounder Prayas Ray Barman from Bengal (Rs 1.5 cr to RCB), Punjab wicketkeeper Prab Simran Singh (Rs 4.8 cr to KXIP), Mumbai batsman Shivam Dube (Rs 5 cr to RCB) and Uttar Pradesh batsman Akshdeep Nath (Rs 3.6 cr to RCB) , who was bought after he re-entered the auction pool.
With uncertainty over the availability of Australian and England players in a World Cup year, the teams went after the West Indians.
Out of the 20 overseas slots available, six were sealed by the Caribbean players including Shimron Hetmyer, Carlos Brathwaite , Nicholas Pooran, Oshane Thomas, Keemo Paul and Sherfane Rutherford.
Royal Challengers Bangalore paid Rs 4.2 crore for Hetmyer. Kolkata Knight Riders, Rajasthan Royals and Delhi Capitals also bid for the stylish West Indian batsman, who had a base price of Rs 50 lakh.
His teammate Brathwaite, the star of 2016 World T20, was sold to KKR for Rs 5 crore after a bidding war between the Dinesh Karthik-led side and Kings XI Punjab.
The all-rounder had entered the auction with a base price of Rs 75.
Another West Indian to get an attractive deal was wicketkeeper Nicholas Pooran. The 23-year-old, who came with a base price of Rs 75 lakh, went for Rs 4.20 crore to KXIP. He is a T20 find and is yet to play Test cricket. Delhi Capitals paid Rs 2 crore and Rs 50 lakh for Rutherford and Keemo Paul respectively while Royals bought Thomas for Rs 1.1 crore.
Amongst other Indians, spinner Axar Patel (Rs 5 cr to Delhi Capitals), pacer Mohit Sharma (Rs 5 cr to CSK) and Mohammad Shami (Rs 4.8 cr to KXIP) were the other names to fetch big bids.
Patel, who made his name at KXIP, was bought by Delhi Capitals after a bidding battle with the Punjab franchise.
Shami, who turned up for Delhi last season, was sold to KXIP while Mohit went back to Chennai Super Kings after a stint with KXIP.
Indian Test player Hanuma Vihari was sold to Delhi Capitals for Rs 2 crore, four times his base price.
Pacer Ishant Sharma, who had a base price of Rs 75 lakh, went to Delhi Capitals for Rs 1.1 crore while wicketkeeper Wriddhiman Saha was bought back by Sunrisers Hyderabad for Rs 1.2 crore.
The high-profile unsold players were Cheteshwar Pujara, Brendon McCullum, Shaun Marsh, Chris Woakes and Dale Steyn.
Out of total 60 players sold at the auction, 40 were Indians and 20 foreigners, costing teams Rs 106.8 crore. (PTI)