Hyderabad, Apr 17: David Warner played in the manner that defines his batting after the bowlers gave very little away, helping Sunrisers Hyderabad humble Chennai Super Kings by six wickets in the IPL here tonight.
While the outcome ended Sunrisers’ run of three straight losses, it also brought to a screeching halt CSK’s ruthless streak, the sound of which though failing to drown the chants of ‘Dhoni, Dhoni’ that reverberated across the stadium.
Mahendra Singh Dhoni watched the proceedings from the dressing room after being ruled out of the game with back spasm, the first time since 2010 that he was not leading his beloved yellow brigade, and the team missed him.
Warner smashed a 24-ball half century before his opening partner Jonny Bairstow (61 off 44 balls) completed the chase of 133 with as many as 19 deliveries to spare.
Leading the side in the absence of Dhoni, Suresh Raina opted to bat after the coin landed in his favour. But the decision did not work wonders for the visitors as Sunrisers bowled a nagging line and length to pick up five wickets for 22 runs.
Coming into the game against a team that was eyeing a playoff berth after winning seven of their eight matches this season, a tricky test awaited the hosts.
But things panned out quite well for Sunrisers, whose bowlers laid the foundation for what should be a morale-boosting result.
Warner then launched into an assault in his typically trademark fashion, hitting the CSK bowlers for 10 boundaries while adding 66 runs for the first wicket with Bairstow, who struck three fours and as many sixes.
Having belted Imran Tahir for three successive boundaries, Warner scored two more fours against Deepak Chahar in the next over but, going for one too many, the swashbuckling Australian ended up giving a catch to the mid-off.
Though SRH lost a couple of wickets in quick succession, Bairstow was there till the end to see his team though with a six.
Earlier, Sunrisers Hyderabad restricted Chennai Super Kings to 132 for five.
Opener Faf du Plessis top-scored with a 31-ball 45 and added 79 runs for the opening wicket with Shane Watson (31). CSK did not have much to cheer about after that as the hosts made a remarkable comeback. Ignored for the World Cup, Ambati Rayadu remained not out on 25 off 21 balls.
While leg-spinner Rashid Khan was the most successful bowler with economical figures of 2/17 in four overs, seamers Bhuvneshwar Kumar (0/21) and Khaleel Ahmed (1/22) were also miserly.
It was a quite beginning for CSK as Bhuvneshwar conceded just one run in the opening over. Complementing his senior pace partner, Khaleel also bowled a tight first over, giving away only three runs.
In a manner least convincing, CSK found their first boundary when Watson’s thick edge went flying over the slip cordon.
Du Plessis drove Khaleel over his head for a boundary in the fourth over, a proper cricketing shot this time around, and CSK followed that with a flurry of fours and sixes.
While Watson found the fence four times, Du Plessis hit two maximums to up the ante at the Rajiv Gandhi International Stadium.
Having added 79 runs in just under 10 overs, Watson was bowled by left-arm spinner Shahbaz Nadeem, giving the home fans something to cheer about after a prolonged wait. (PTI) 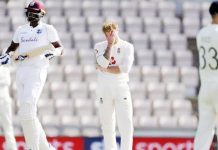