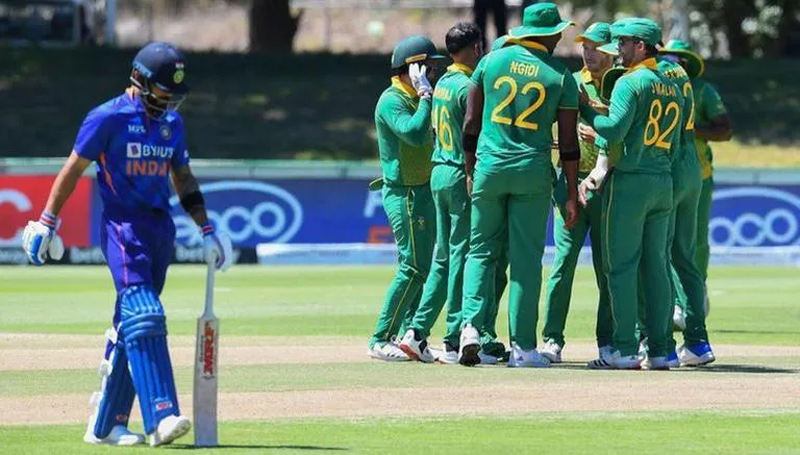 Paarl, Jan 21: A young South Africa punished a jaded Indian team for its outdated approach, handing it one of the most comprehensive series defeats in recent times with an easy seven-wicket victory in the second ODI here on Friday.

A target of 288 was below-par on a flat track and the seasoned Quinton de Kock (78 off 66 balls) in the company of rising sensation Janneman Malan (91 off 108 balls) added 132 for a match-deciding opening stand.

The home team eventually reached the target in 48.1 overs to take an unassailable 2-0 lead in the three-game series.

KL Rahul’s captaincy ambitions and head coach Rahul Dravid’s wish to see him being anointed in the long run, however, suffered a rude jolt following back-to-back defeats in 50-over games on a track, which was more Indian than South African in nature.

India’s archaic approach, a very ’90s safety first mind-set, hurt the teamas has been the case for a while now in the white-ball format.

A tour that started with a great Test win at the Centurion is now in tatters and the Indian contingent would be looking to board the charter flight back home on Monday after the inconsequential third ODI at the Newlands, which would be a spicier track compared to the one at Boland Park.

The batting, save Rishabh Pant’s cavalier style, was too defensive starting with skipper Rahul, whose 55 off 79 balls was an innings of bygone era, which cannot align with the fearless cricket that teams want to associate with now.

The match slipped away from India’s grip during their innings once Pant was gone as the others simply failed to get going when the ball didn’t come on to the bat and it was not a track that offered firm and even bounce.

It’s not a new malaise to plague Indian cricket but what should be worrying is that nothing has been done to address the issues.

A veteran like Bhuvneshwar Kumar (8-0-67-0) was swept as well as pulled for sixes by De Kock while Malan would come down the track to hit him through the covers signalling that his early 130 kmph speed, with lack of variations, was simply not working.

For Shardul Thakur (40 not out and 5.1-0-36-0), the quality batting show won’t save him if he doesn’t curtail the number of bad balls that he is bowling per spell.

And Ravichandan Ashwin (10-1-68-0)’s second coming in white ball cricket might end in a whimper even before it gathers enough wind to sail through.

Yuzvendra Chahal (10-0-47-1) tried his best but his confidence, after being unceremoniously dumped from the T20 World up final squad, has been in tatters.

Venkatesh Iyer (22 off 33 balls and 5-0-28-0) is still a work in progress and his fast-tracking in the limited overs set-up is less of pragmatism and more desperation to find a fresh version of injury-plagued Hardik Pandya.

Iyer might develop into a good cricketer but he is a far from finished product and may be some time away from being a success at the international level in all conditions.

As of now, he is not a natural No.6, who can be a finisher like Pandya was in his best days before injury.

Had Pant not played the role of an enforcer to perfection, even a target of 288 wouldn’t have been possible. And this was after it seemed India would score close to 315 when he was having a steady stand of 115 with his skipper.

But there dismissals in quick succession saw Proteas make a comeback on a Boland Park strip where stroke-making wasn’t an easy proposition for a new batter.

The two Iyers — Shreyas (11 off 14 balls) and Venkatesh (22 off 33 balls) found it a real struggle to get going with the ball not coming onto the bat as the momentum completely shifted.

South Africa were atrocious on the field missing four catches and an easy run-out but they hardly paid for the mistakes.

India ended up with a score that was at least 20 runs less than what could have been considered challenging. For that, Pant needed to make a deserving maiden ODI hundred, which didn’t happen.

Skipper Rahul dropped anchor at one end but it was more like his own runs than ones that would have really helped the team’s cause as he stayed at the wicket for more than 30 overs opening the innings and barely managed a fifty plus score.

The approach hurt even though Pant, with 10 fours and two sixes, took charge to keep the run-rate at a healthy five-plus per over.