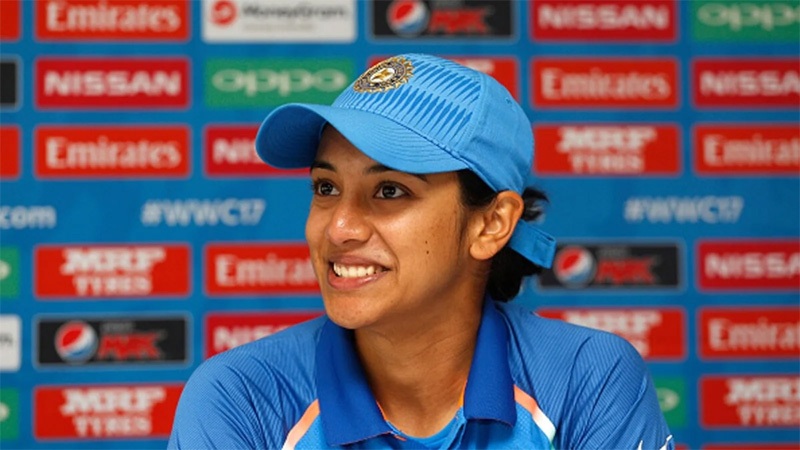 Dubai, Jan 24: India’s swashbuckling opener Smriti Mandhana was on Monday named the ICC Women’s Cricketer of the Year for the second time for her stellar run of form across all formats in 2021.
Mandhana, who also made it to the ICC T20 women’s Team of the Year, pipped fellow nominees Tammy Beaumont of England, Lizelle Lee of South Africa and Gaby Lewis of Ireland for the to the top award — the Rachael Heyhoe Flint Trophy, the ICC said in a statement.
The southpaw had won the award in 2018 as well when she was also named the women’s ODI Cricketer of the Year, making her only the second women’s player to win the highest individual distinction in the overall category.
The Indian T20 vice captain is only the second India woman player to bag an ICC award after veteran fast bowler Jhulan Goswami, who was named the ICC Player of the Year in 2007.
Despite India enduring a difficult 2021, Mandhana’s stock continued to rise this year in all formats of the game. She scored, 855 runs in 22 internationals at an average of 38.86 which included one century and five half-centuries.
Commenting on receiving the honour, Mandhana, said: “I am truly honoured for receiving the prestigious Rachael Heyhoe Flint Trophy for the ICC Women’s Cricketer of the Year 2021.
“A recognition of such high class from the global governing body of cricket in an exceptional and difficult year will motivate me to continue to better my game and contribute to Team India’s success going forward.
“I look forward to 2022 with a clear focus on winning the ICC Women’s Cricket World Cup 2022 in New Zealand as we continue to prepare as a team and unit,” she added.
In the limited-overs series against South Africa where India won just two of the eight matches at home, Mandhana played a major role in both of the wins. She made 80 not out as India chased down 158 in the second ODI that helped them level the series and scored 48 not out in the win in the final T20I.
The 25-year-old played a sublime innings of 78 in the first innings of the one-off Test against England that ended in a draw. She played an important knock of 49 in India’s only win in the ODI series.
Her 15-ball 29 and fifty in the T20I series went in vain though as India fell short in both the matches and lost the series 2-1.
The southpaw was in good touch in the series against Australia, starting with the ODI series where she scored 86 in the second ODI.
She compiled a brilliant century in the only Test (the first of her career), and was awarded the Player of the Match. She scored her second T20I fifty of the year in the final T20I, though India fell short and lost the series 2-0.
Mandhana made India’s first-ever pink-ball Test even more memorable by smashing her maiden century in the longest format. (PTI)