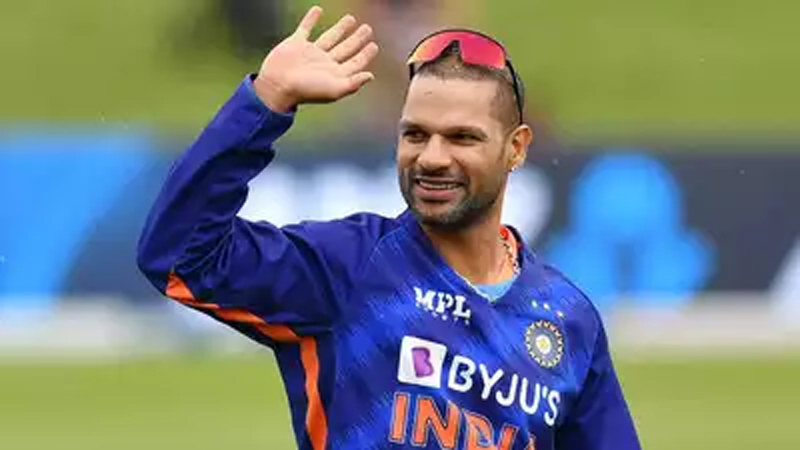 NEW DELHI, Dec 5: India opener Shikhar Dhawan, who last played a red-ball game three years ago, has been named among Delhi’s 39 probables for the Ranji Trophy beginning December 13.
Dhawan plays only the 50-over format for India besides the IPL. The 37-year-old did play a few games in the Syed Mushtaq Ali T20 Trophy and the recent 50-over Vijay Hazare tournament.
To the disappointment of some in the Delhi camp, the final squad will be announced on December 8 or 9 ahead of their opener against hosts Maharashtra in Pune, giving them hardly any time to prepare.
“Shikhar’s experience will come in handy for the team. We are hoping that he is able to play a few games, if not all,” said a DDCA source.
As per the probables list released by DDCA, the 39 members were supposed to report at Roshanara Ground on Monday morning but more than half of them did not show up.
Veteran pacer Ishant Sharma, Yash Dhull and Nitish Rana, who captained the side in the two white-ball events, also figure in the Delhi list. The captain for Ranji Trophy will also be named with the squad announcement.
The biggest concern for the team has been the fitness of their pacers and the management is hoping that the likes of Simarjeet Singh and Pradeep Sangwan are able to maintain their fitness throughout the season.
Delhi did well to qualify for the SMAT knockouts under new skipper Rana and coach Abhay Sharma this season, before an underwhelming show in the Vijay Hazare Trophy.
Delhi last won the Ranji Trophy in the 2007-08 season.
Probables list: Shikhar Dhawan, Ishant Sharma, Yash Dhull, Nitish Rana, Himmat Singh, Dhruv Shorey, Ayush Badoni, Jonty Sidhu, Vaibhav Khandpal, Hrithik Shokeen, Anuj Rawat, Vikas Mishra, Shivank Vashisht, Simarjeet Singh, Navdeep Saini, Mayank Yadav, Lalit Yadav, Lakshay Thareja, Vaibhav Rawal, Kuldip Yadav, Rajesh Sharma, Mayank Rawat, Harshit Rana, Pradeep Sangwan, Pranshu Vijayran, Arpit Rana, Salil Malhotra, Rohan Rathi, Vaibhav Sharma, Krish Yadav, Karan Dagar, Yogesh Sharma, Tejas Baroka, Hardik Sharma, Shivam Sharma, Yash Sherawat, A Vaibhav, Divij Mehra, Siddhant Sharma. (PTI)