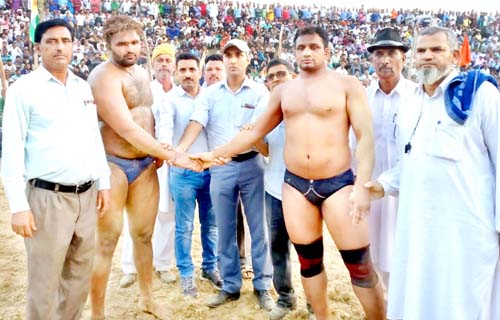 Excelsior Sports Correspondent
KATHUA, June 23: Outplaying Wrestler Amit of Chandigarh in a close contest in the main bout, Shamsher of Dina Nagar lifted the title of the Wrestling event, organized by Modern Dangal Committee Sarn at Gurah Kalyan, Billawar, here.
Rahul Basotra, Tehsildar Ramkot was the chief guest on the occasion, while Vijay Kumar Sharma, SHO Billawar, Pawan Singh, I/c Police Post Ramkot and Sanjeev Kumar, Naib Tehsildar Gurah Kalyal were the guests of honour.
The chief guest and the other dignitaries distributed a cash award of Rs 51, 000 among the winners and the runners-up Wrestlers of the final bout on the occasion.
75 bouts were held during the day, which were witnessed by a large number of people.
The 2nd main bout of Rs 31, 000 was held between Gurjant from Amritsar and Kulbir from Jammu which was won by Gurjant in an easy contest.
Wrestlers Ramesh from Billawar, Benia Min from Jammu and Viku from Billawar were also honoured for outstanding performances.
Modern Dangal Committee Sarn, Gurah Kalyal (Billawar) headed by Randhir Singh Kotwal expressed thanks to the dignitaries, participants and the spectators for their participation to make the event a success.