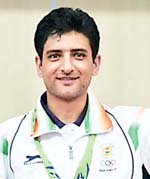 New Delhi, June 23:
Chain Singh pipped 2012 Olympic bronze medalist Gagan Narang to clinch the gold in the three-position rifle event in the KSS Memorial Shooting Championship at Dr. Karni Singh Shooting Range, here today.
The J&K stalwart representing the Army Marksman Unit, helped his teammates Surendra Singh and Satyendra Singh to annex the gold in the team event as well.
The individual category of the three-position rifle event saw Chain Singh shoot for gold with a score of 452.6 while Narang representing Air India missed out on the top position by a margin of 2.4 points (450.2).
Chain’s teammate from the Army, Surendra Singh Rathore bagged the bronze with a score of 438.3.
In the team category, the Army trio comprising of Surendra Singh, Chain Singh and Satyendra Singh shot a cumulative score of 3473 to leave their opponents behind and claim the first place on podium.
Aishwarya Singh, Navdeep Rathore and Harshit Binjwa bagged the silver with 3439 points for Madhya Pradesh while the trio representing Navy – G. Purshotam, Rahul Poonia and Nigma Parida – had to settle for the bronze.
The junior (men) category of the same discipline, saw local lad Abhay Kumar Goel eke out a narrow victory over Madhya Pradesh’s Akash Patidar (441.9) by scoring 442.7. Goa’s Yash Padloskar languishing behind with a total of 422.8, still managed to bag the bronze.
Gaayathri N. Of Tamil Nadu towered over the girl from Gujarat with a score of 453.3 while Haryana’s Sonika settled for bronze with 439.5.
But Hema, the GFG shooter who trains with Slovenian coach Anton Belak, stayed on path to avenge her loss in the individual category with a stellar performance in the team event as she combined with Lajja Gauswami and Mistry Gunjan to taste victory and win the gold medal.
The trio from Haryana – Sonika, Kajal Saini and Aditi Singh – took the second spot with a cumulative total of 3411 while the Maharashtra trio took the third spot with a score of 3390.
2018 Commonwealth bronze medalist Om Prakash Mitharwal (241.8) also missed out on another gold and had to settle for silver by a narrow margin of .2 as Deepak Sharma emerged triumphant with 242.
Abhishek Verma claimed bronze with a score of 220.8. (PTI)

Clear Sky In Jammu, Cloudy In Kashmir For Next 24 Hours: MeT