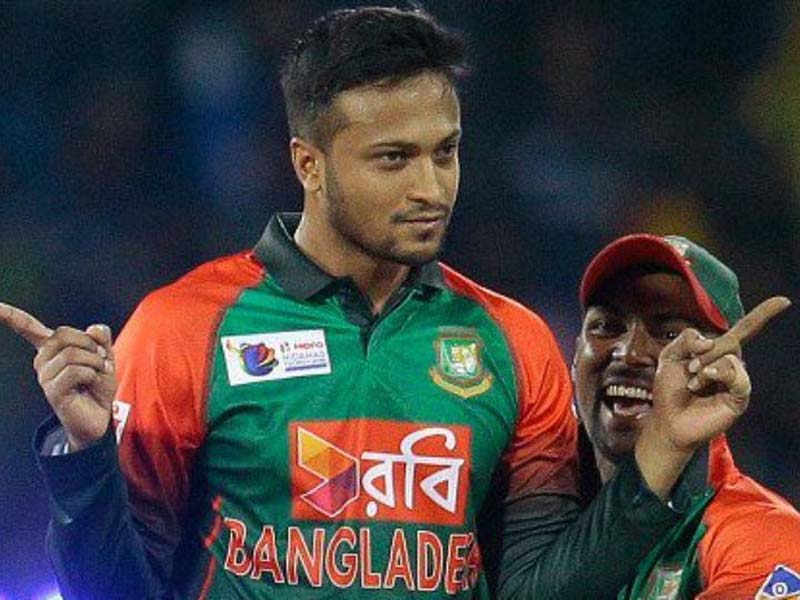 Dubai, May 22: Senior Bangladesh cricketer Shakib Al Hasan today jumped to the top of the latest MRF Tyres ICC ODI rankings for all-rounders, which doesn’t feature a single Indian in the top-10 chart.
Shakib, 32, grabbed the top spot just ahead of the ODI World Cup after showcasing fine form during the tri-nation series in Ireland, which Bangladesh famously won to claim their first title in a multi-nation tournament.
In the three matches of the series, Shakib totalled 140 runs, including two unbeaten half-centuries and also picked up two wickets.
Shakib now has 359 points, 20 clear of Afghanistan’s Rashid Khan, the previous holder of the top ranking, who has now slipped to No. 2.
Rashid’s Afghanistan team-mate Mohammad Nabi completes the top three, with 319 points.
Pakistan are the only other team to have two players in the top 10, with Imad Wasim at No. 4 and Mohammad Hafeez claiming the seventh spot.
They are separated by New Zealand’s Mitchell Santner (No.5) and England’s Chris Woakes, who leapfrogged four places to No. 6.
West Indies captain Jason Holder is their top-ranked all-rounder at number eight spot followed by Zimbabwe’s Sikandar Raza and Angelo Mathews of Sri Lanka.
England’s Ben Stokes missed out on the top 10 by one spot, finishing eight points behind Mathews.
Kedar Jadhav, who is part of India’s World Cup team and is recovering from a shoulder injury, is the best-placed Indian at joint 12th spot alongside South Africa’s Andile Phehlukwayo and Moeen Ali of England.
Hardik Pandya completes the top 20 list. (PTI)