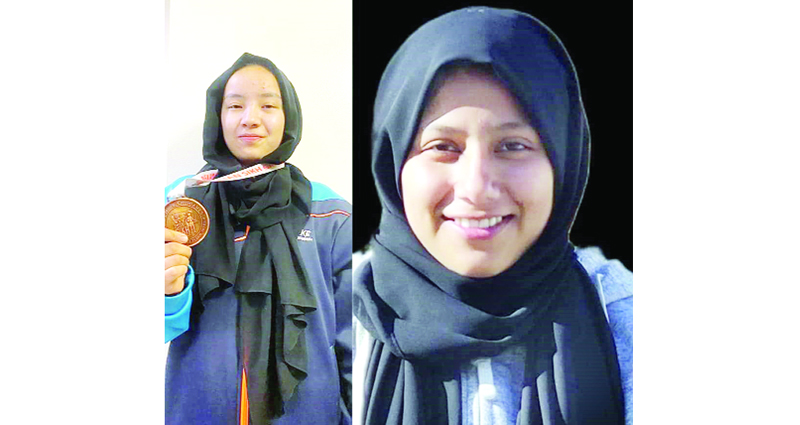 KARGIL, Jan 21: Shahnaz Parveen daughter of Mohammad Issa from Sankoo Kargil and Farzana Batool daughter of Mohammad Baqir from Trespone Kargil have brought laurels to Union Territory of Ladakh by winning gold and bronze medals respectively in the recently held Asian Sikh Games at Gurugram.
Both the players represented India in the Sikh Asian Games and have made the whole Ladakh region proud at the international level.
Chairman and Chief Executive Councillor (CEC), Kargil, Feroz Ahmad Khan congratulated both the players and appreciated the role of Ladakh Taekwondo Association (LTA) for providing better platform to young and energetic players to excel in Olympic Games like Taekwondo and continuing the spree of producing international players from Ladakh.
He said that sports associations should provide a platform to players at the domestic level so that they can have a better experience before participating at the national and international levels.
The CEC assured that LAHDC Kargil will always be at the forefront to support the associations that are helping in grooming such talent.
President, LTA, Gulzar Hussain Munshi while congratulating the winners and their parents urged the UT administration to prioritize the games as per the norms of the Government of India with categorising games as per Olympic, non-Olympic games and indigenous games which will help and motivate the players.
Meanwhile, General Secretary, LTA, Anayat Ali said that Shahnaz Parveen has been one of the best players of the association and has been selected for World University Games.
Shahnaz was trained under the guidance of International Coach Atul Pangotra.