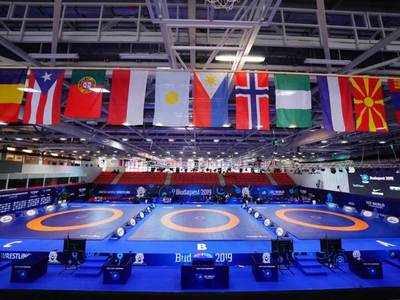 India’s wrestler Ravinder stunned reigning European wrestling champion Arsen Harutyunyan of Armenia in the semi-finals to enter the finals of the ongoing U23 World Wrestling Championships in Budapest, Hungary in 61kg freestyle category.
Armenian started as favorite in the semi-final bout and as per his billing took 3-0 lead by end of the round 1. In the round 2 Ravinder showed great fighting spirit to score the succor move to which the Arsen did not had any reply. Ravinder finally won the bout by fall and became the first wrestler from India in this edition of the U23 World championship to enter the finals.
In the finals Ravinder will meet Ulukbek Zholdoshbekov of Kyrigistan (KGZ) who defeated Japanese wrestler in the semi-finals.
Earlier, Ravinder had scored victories over experienced campaigners from Russia and host Hungary. In the Last 16 bout, Ravinder defeated Marcell Budai Kovacs of Hungary by 12-1 scoreline. In the quarter-final Indian got the better of Dinislam Takhtarov of Russia.
The 22-year-old Gulia 79 kg freestyle category was pitted against 2 time European U23 champion Radik Valiev of Russia in the battle of bronze which the Indian lost.
Gulia’s good run was halted in the semi-finals of the 79kg freestyle category late Monday night on the Day 1. Gulia tried his best but still he was no match for the Abubakr Abakarov of Azerbaijan in his semi-finals bout. 2018 World Junior runners up Abakarov won the bout 8-1 against Gulia to book his place in finals.
In the quarterfinals, Gulia defeated Damjin Batzul of Mongolia in one-sided bout by 11-1 and China’s Ligan Chai in the last 16 match-up. Gulia performed brilliantly to outwit the Chinese by 7-2 to book a place in the last 8 of the world championships. In the opening round, Gulia got better of the host country wrestler Lukacs Botond. In a hard fought bout Gulia prevailed 3-1 against the local hope.
In 74kg category repechage round Gaurav Baliyan was declared winner as his opponent Brady Berge of US fell fell unconscious on the mat.
The medical staff present at the venue, tried to revive the American for few minutes but as they could not. The American athlete was taken to the hospital and Gaurav was declared the winner.
In the next repechage round bout Baliyan will face Fazli Eryilmaz of Turkey. Earlier On Tuesday 18 year-old Baliyan lost out to 2018 Junior world silver medallist Zhamalov of Russia. (UNI)