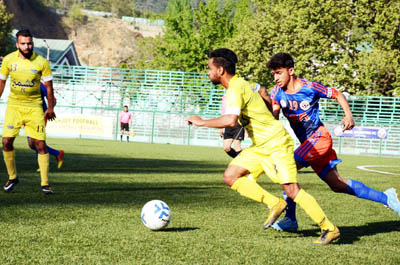 Excelsior Sports Correspondent
JAMMU, Apr 15: The matches of the ongoing first Mufti Mohammad Sayeed (MMS) Memorial Football Tournament restarted at Synthetic Turf TRC, here today.
Lone Star KFC defeated J&K State Football Academy (SFA) by two goals to nil in a high voltage match. The star studded teams played aggressive football from the word go which delighted the fans who had thronged the venue in huge numbers.
As the match started, forwards of both the teams started attacking other’s goalpost to seize an early initiative. However, defence lines of both the teams ensured that no damage was done and the first half ended with score line reading 0-0. The goalkeepers of both the teams made some exceptional saves.
The second half also started with the two teams making all out efforts to open their account. The intense battle continued for most part of the second half. However, Faisal Gulzar of Lone Star team managed to score first goal of the match in 57th minute of the play when he shot a kick straight into the opposite goalpost. The lead boosted the morale of Lone Star players and they went on all out attack. In 70th minute of the match Karun Raina doubled the lead for Lone Star.
Trailing by two goals, the SFA players tried their best to score, but strong defence lines of Lone Star thwarted all their attempts. When referee blew the final whistle the score line read 2-0 in favour of Lone Star. Umer Bashir, goalkeeper of the winning team was declared as player of the match for his brilliant performance.
Meanwhile, in Jammu the B-Division matches of the event are going on in full swing at different venues. Akhnoor FC defeated Young Tigers FC by two foals to one in a B-Division match. Ali and Akash were scorers for the winning team while Tashi scored lone goal for Young Tigers.
In Kathua, 23 matches of the event have been completed while 19 more matches would be played in the coming days. Top football Clubs of Jammu, Kathua, Hiranagar, Billawar and Basohli are taking part in the tournament, which is being held under the banner of Jammu and Kashmir Football Association (JKFA) and is sponsored by J&K State Sports Council.

Direct attack on ecosystem that supports terror; every drop of blood will be avenged:...

Priority On Having Assembly Elections In J&K At The Earliest: Ramesh