Excelsior Sports Correspondent
JAMMU, Jan 15: Lieutenant Governor, Girish Chandra Murmu inaugurated the renovated Maulana Azad Cricket Stadium in an impressive, well attended and colourful function here today.
In his inaugural address, the Lt Governor congratulated the sports fraternity of J&K for having the international level sports facilities here at the newly inaugurated MA Cricket Stadium.
He expressed delight to inaugurate the renovated Maulana Azad Stadium that has been upgraded under the Prime Minister’s Development Package (PMDP) which is one of the priorities of the present Government.
“When the Development Package was prepared, I was fortunate enough to be a part of it, he said, adding that, around Rs 40 cr have been spent out of the Rs 200 cr earmarked for sports infrastructure and rest of the amount would be spent for developing sports facilities all over the UT. Apart from cricket, other sports like football, Hockey, Volleyball, and Athletics etc required attention and various projects were going on to develop facilities for the sports earlier played in the said stadium,” he added.
Terming this as an historic occasion, the Lt Governor said that the need for an International Standard cricket stadium was fulfilled today for further grooming the talent of our youth and expose them to international requirements.
He observed that the people of J&K have immense love for sports and the present Government is making headways in developing sports in the UT with various sports development projects underway and many more being in the pipeline.
He said this facility has become a sporting hub for the youth, and sports loving people of Jammu with all modern sports equipment available there.
“Government is resolute to develop sports and allied infrastructure and promotion of sports at grass root level and for this, land is being identified at Panchayat level,” the Lt Governor maintained.
The Lt Governor observed that sports is vital for the holistic development of youth, fostering their physical, social, and emotional health and imbibing qualities like leadership, teamwork, fair play and discipline which one needs to achieve higher goals.
“The Government is committed to fulfilling the developmental aspirations of the people and Youth in particular to channelize the young energies in Nation Building,” he added.
The Lt Governor expressed hope that the youth, sports persons and sports lovers gathered on this historic occasion would carry forward the spirit of universal harmony and brotherhood, and that the facility would contribute immensely to the physical and social well being of the younger generation.
While speaking on the occasion, Farooq Khan, Advisor to the Lieutenant Governor said that the new international level stadium would give a great push to the development of sports in J&K. He said that the Government is making dedicated efforts to create new sports facilities at various levels and hoped that with the coming of facilities of international standards, the sports in J&K would emerge as a power house in the national and international arena.
Earlier, in his welcome address, Sarmad Hafeez, Secretary, Youth Services and Sports informed that the   facility has been upgraded as per Board of Control for Cricket in India (BCCI) norms and the Stadium would be an ideal one in accordance to promote sports in J&K.
On the occasion, the Lt Governor interacted with the sports persons and also awarded the winner and runner-up teams of Panchayat Level Football Cup.
Demonstration of sports activities like Wushu, Judo and Yoga was presented by the young sports persons and an exhibition cricket match was also played to mark the formal opening of the MA Cricket Stadium.
The cricket stadium has been upgraded at the cost of Rs 40 crore under Prime Minister’s Special Package and supervised by the National Projects Construction Corporation (NPCC).
The Stadium will have a well established Pavilion, Standard Gymnasium, Conference Halls, Open VIP, Media and Players Zones and Galleries, and not to talk of the customary Dressing and Changing Rooms besides Match Referee Rooms, Umpires Rooms, Medical Rooms and Dope Test Rooms in a modernized fashion.
There will also be a provision of establishing around 20,000 seats in the entire Stadium, including VIP Galleries in the Pavilion.
Kewal Kumar Sharma, Farooq Khan and Rajiv Rai Bhatnagar- Advisors to the Lieutenant Governor; Jugal Kishore Sharma, Member Parliament; Chander Mohan Gupta, Mayor, Jammu Municipal Corporation (JMC); BVR Subrahmanyam, Chief Secretary; Arun Kumar Mehta, Financial Commissioner, Finance; Sanjeev Verma, Divisional Commissioner Jammu; Pandurang K. Pole, Secretary, Department of Food, Civil Supplies and Consumer Affairs; M Raju, Secretary, PDD, Sushma Chauhan, Deputy Commissioner Jammu; Sarmad Hafeez, Secretary, Youth Services and Sports, Ranjeet Kalra, ace Sports Administrator and Parvez Rasool International Cricketer were present on the occasion. 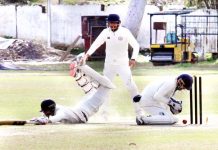 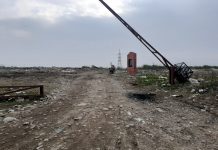 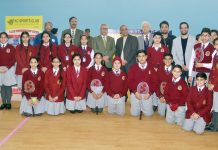