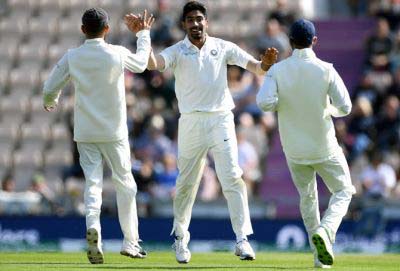 Southampton, Aug 30: Indian seamers, led by Jasprit Bumrah, produced a disciplined bowling effort to dismiss England for 246 on the opening day of the fourth cricket Test, here today.
Bumrah (3/46) scalped three wickets, while Ishant Sharma (2/26), Mohammed Shami (2/51) and spinner R Ashwin (2/40) took two wickets each and Hardik Pandya (1/51) accounted for one as India dominated the proceedings on the opening day.
All-rounder Sam Curran anchored the England innings with a determined 78 as he shared 81 runs with Moeen Ali (40) and 63 runs with Stuart Broad (17) for the seventh and ninth wickets respectively.
The hosts lost six wickets for 86 runs to find themselves in a precarious position after opting to bat.
However, the 20-year-old Curran resurrected the England innings with a 136-ball innings which was studded with eight hits to the fence and a six. It was his second Test half-century.
The left-hander was the last batsman to be dismissed when he was cleaned up by Ashwin in the 77th over.
At stumps, Shikhar Dhawan (3 not out) and KL Rahul (11 not out) were at the crease with the hosts leading by 227 runs.
Earlier, Bumrah struck twice in the first session as England were reduced to 57-4 at lunch.
Bumrah posed problems from the very beginning. Keaton Jennings (0) made a mess of leaving the ball and shouldered arms to an incoming delivery across the stumps, and was out plumb lbw in an ugly fashion in the third over.
England should have been two-down in the fifth over, when Bumrah also trapped Joe Root (4), on 2, plumb lbw. When the on-field umpire didn’t agree, DRS review showed that the bowler had over-stepped.
Root didn’t survive for long, adding only 14 runs for the second wicket. He was out lbw, this time to Sharma who didn’t over step. England went for a referral and lost a DRS review at that instance.
Even as Alastair Cook (17) stayed his longest duration at the crease in this series, the top-order had no answer to the sustained pressure built up by the Indian attack. Runs came in a trickle, and even after the drinks’ break, the pacers didn’t relent.
Bumrah returned to further peg England back as Jonny Bairstow (6) was caught behind in the 13th over, nicking him off with an unplayable delivery outside the off stump.
Pandya then got rid of Cook, with Kohli taking a brilliant low catch at third slip as England were reduced to 36-4 in the 18th over. England barely managed to crossed 50 in the 20th over.
It could have made for an even more miserable score for the hosts as Buttler, on 11, had an under-edge off Shami just ahead of lunch. But the ball died on the way to keeper Rishab Pant, who didn’t get down in time.
Post lunch, Shami struck early to inflict another crucial blow. Jos Buttler (24) was out caught at slip in the third over after the break.
Ben Stokes (23) continued to defend stoically, lasting 79 deliveries. Shami bowled brilliantly, continuing from where he left off in the morning session. And it brought him reward when he trapped Stokes lbw in the 35th over as England were reduced to 86-6
Curran and Ali then came together, and held fort until the tea break. They showed a lot of patience, in particular Curran who stayed calm and went for his strokes whenever opportunity presented itself. They added 50 off 94 deliveries and also took England past the 100-mark in the 39th over. England reached 139-6 at tea.
After tea, The duo added another 28 runs as India’s frustration started building up.
Whilst the bowling had been tight until then, there were a few byes let through and Hardik Pandya (1-51) was taken for runs.
Ashwin (2-40) got the breakthrough as Bumrah pulled off a good running-in catch to Ali’s slog sweep.
Adil Rashid (6) didn’t last long, trapped lbw by Ishant Sharma (2-26) as England were reduced to 177-8.
Curran then started farming strike, even as he reached an impressive half-century off 109 balls with a six off Ashwin. He attacked from one end, while Broad fended at the other, and the duo carried England past 200 in the 69th over.
They added 63 runs for the ninth wicket, a few too many for India’s liking considering the precarious position England had found themselves in the morning. The visitors conceded 23 byes and a total of 34 extras.
Finally, Bumrah (3-46) managed to dismiss Broad lbw, and after another six runs, Ashwin ended the English innings by bowling Curran.
Earlier, India fielded an unchanged eleven from Nottingham, bringing an end to the 45-match streak of constant chopping and changing. It was the first time in 39 Tests as captain that Virat Kohli fielded the same team as the previous match. PTI
SCOREBOARD
England First Innings
A Cook c Kohli b Hardik Pandya 17
K Jennings lbw b Bumrah 0
J Root lbw b Ishant 4
J Bairstow c Pant b Bumrah 6
B Stokes lbw b Shami 23
J Buttler c Kohli b Shami 21
MM Ali c Bumrah b Ashwin 40
SM Curran b Ashwin 78
AU Rashid lbw b Sharma 6
SCJ Broad lbw b Bumrah 17
JM Anderson not out 0
Extras: (B-23, LB-9, NB-2) 34
Total: (For 10 wickets in 76.4 overs) 246
Bowling: JJ Bumrah 20-5-46-3, I Sharma 16-6-26-2, HH Pandya 8-0-51-1, Mohammed Shami 18-2-51-2, R Ashwin 14.4-3-40-2.
India First Innings
Shikhar Dhawan not out 3
KL Rahul not out 11
Extras: (B-4, W-1)
Total: (For no loss in 4 overs)
Bowling: Anderson 2-1-3-o, Broad 2-0-12-0