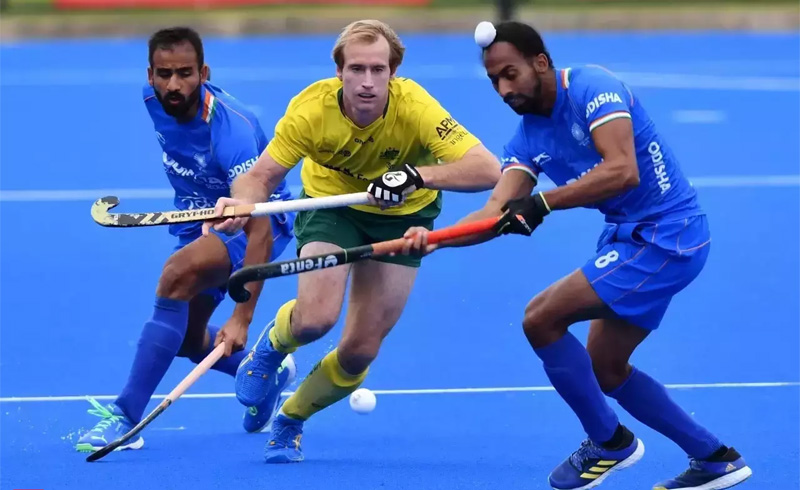 ADELAIDE, Nov 27:  India could play well only in patches as Blake Govers slammed a brilliant hat-trick to guide Australia to a dominating 7-4 win in the high-scoring second hockey Test here on Sunday.

Skipper Harmanpreet Singh struck even before the home team could settle, firing India to a third-minute lead with his precise and powerful penalty corner conversion.

India looked threatening up front and Harmanpreet almost converted a second one but the home team began to call the shots soon with Govers and Jack Welch leading the goal spree.

The Men in Blue dished out an inspiring show in the third quarter and trailed by just one goal at 3-4, but were blown away in the final 15 minutes due to a sloppy defense.

India endured its 12th straight loss to the world number one side and now need to win the next two games to keep the five-match series alive.

The third Test of the World Cup build-up series will be played on Wednesday.

Having scored the winning goals in their close 5-4 victory in the first Test, Govers was once again in the thick of action.

He scored his goals in the 12th (PC), 27th and 53rd (penalty) minutes, while Welch secured his brace with his strikes in the 17th and 24th minutes.

Jake Whetton (49th) and Jacob Anderson (48th) were the other goal scorers for the Kookaburras led by Eddie Ockenden, who became the only seventh player in history to make at least 400 International appearances.

Hardik Singh (25th) and Mohammed Raheel (PC 36th) struck the other two goals for India, while Harmanpreet completed his brace in the final minute (60th) of the match from a penalty.

India had a counter-attacking start to their game with Mandeep Singh winning the first penalty corner in the third minute.

Skipper Harmanpreet made no fuss about it as the dragflick specialist smashed to the bottom left corner with his powerful effort to give India the early lead.

Indian defence was rock solid in the first quarter when they thwarted four PCs with perfection but Govers finally made his presence felt with his powerful shot on the reverse to bring it level.

In space of seven minutes, Welch brought up his brace when he scored from a rebound to make it 3-1.

But soon, Hardik reduced the deficit to 2-3 with five minutes left in the first-half when he nicely intercepted the ball to raid the Australian D.

Australian defence had no answer to Hardik’s fiery raid as he seized control of the possession before smashing it home with a solo effort.

Govers completed his brace before the halftime to restore their two-goal cushion scoring from a field goal.

India made it 3-4 with a well-executed penalty corner this time by the promising Mohammed Raheel in the third quarter.

Going wide with his dragflick this time, Harmanpreet passed it through to Raheel who created a little pocket in front with the deflection to score past Benjamin Rennie.

Thereafter it was a one-way traffic for the Kookaburras as India put up an extremely shoddy show in the fourth quarter.  (PTI)