Excelsior Sports Correspondent
SRINAGAR, Apr 16: After the successful culmination of Cluster Phase in all Districts, 8 teams have qualified for the final round of Youth Football Legue, which kick-started at TRC Turf, here today.
The qualifying 8 teams in boys category are Samba, Kishtwar, Poonch, Udhampur, Anantnag, Pulwama, Srinagar and Bandipora while as 6 teams competing in girls category include Jammu, Kathua, Srinagar, Bandipora, Budgam and Baramulla.
In today’s first match, Anaantnag defeated Bandipora by two goals to one (2-1). From Anantnag, Saqlain and Mohsin were the goal scorers, while from Bandipora, Mohd Nayeem netted the goal.
The second match was played between Srinagar and Udhampur, wherein Srinagar dominated the game from the word go. They scored back to back goals as Udhampur had no counter against their attack. First half ended with the scorline of 5-0 in favour of Srinagar. In the second half, Srinagar started again with the goal scoring intent and scored 4 more goals.
Muneer, Zubair, Moonis, Mehran, Afreen scored 1 goal each while Parvaiz and Waseem scored 2 goals each for Srinagar. Finally Srinagar thrashed Udhampur by (9-0).
Nusrat Gazala, Divisional Sports Officer Central; Ab Lateef, Accounts Officer Sports Council and International footballer, Mehraj Ud Din Wadoo were the special guests on the occasion, who interacted with the players before the start of the match.
The event is being organised by State Football Academy under the supervision of J&K State Sports Council and is being supported by J&K Football Association.
In tomorrow’s fixture, Samba will take on Kishtwar at 10 am, while Poonch will lock horns with Udhampur at 12 noon.
In the girls category, Srinagar will face Kathua in the opening match of the tournament. 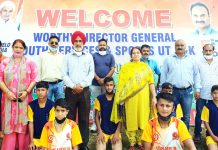