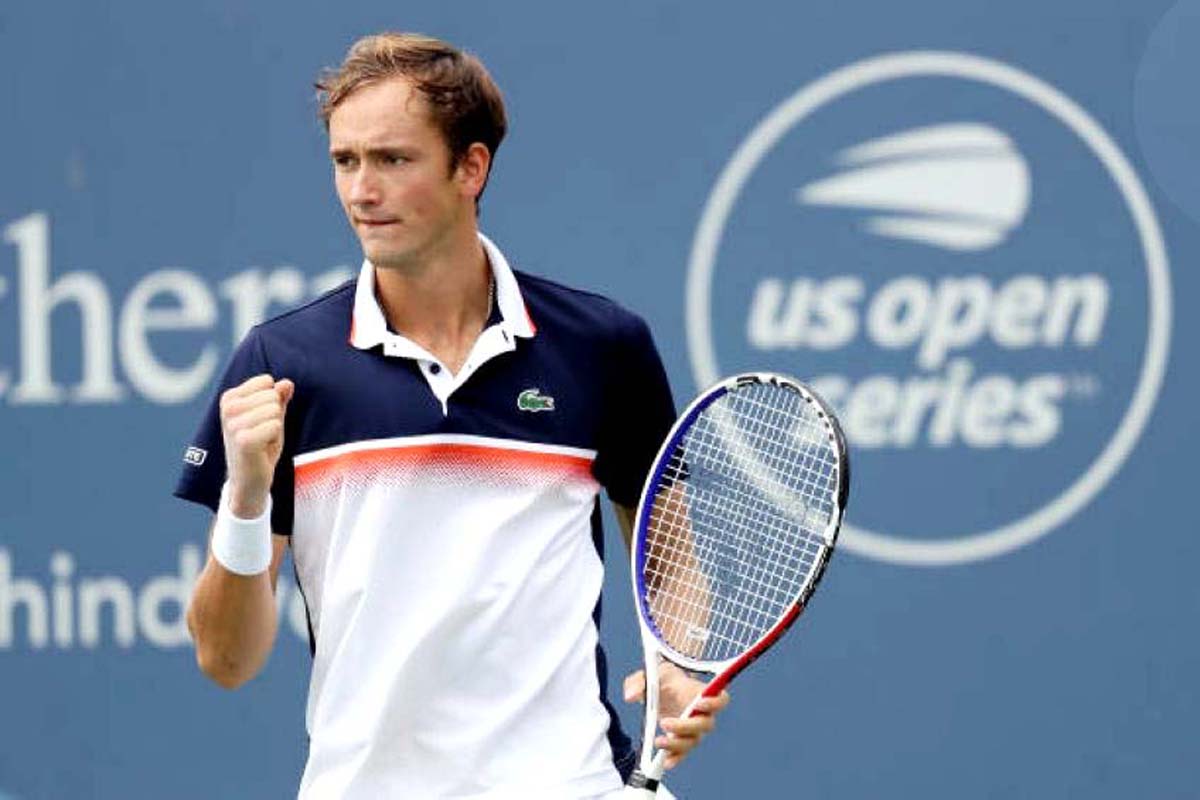 Cincinnati, Aug 18:
World number one Novak Djokovic wilted under pressure from Daniil Medvedev, falling 3-6, 6-3, 6-3 to the ninth-seeded Russian in the Cincinnati Masters semi-finals.
Medvedev’s upset win on Saturday sent him into a title showdown with another unexpected finalist, 16th-seeded Belgian David Goffin, who defeated France’s Richard Gasquet 6-3, 6-4 to reach his first ATP Masters 1000 final.
A fuming Djokovic, who looked to have control of the contest in the early going, was caught out when Medvedev stepped things up in the second set.
“I don’t know how I turned it around, I was so tired after the first set and I thought I might not be able to keep up the intensity,” said Medvedev, who has competed in 15 hardcourt matches since July 30.
“But I had a momentum chance in the second set and the crowd gave me energy,” added the Russian, who will be playing his second Masters series final in eight days, after falling to Rafael Nadal in Montreal last Sunday.
“Novak had been destroying me on second serve, so I just went for it,” Medvedev said.
“It’s a great feeling to win and beat the number one. That shows I deserve to be in this final.
“I played an unbelievable match, I’m very happy.”
Medvedev also beat Djokovic in their last meeting, on clay at Monte Carlo in April.
Djokovic, the defending champion who was playing his first tournament since his Wimbledon triumph in July, shouldered his bag and left the grounds within moments of his defeat.
Medvedev won 12 of the last 14 points in the second set to square the match against Djokovic, then ran up a 3-1 lead in the third on the way to victory on his first match point.
He’s 1-1 against Goffin, with both of their matches played this season — at the Australian Open and Wimbledon.
There was an upset in the women’s draw as well, as Russian veteran Svetlana Kuznetsova defeated top-seeded Australian Ashleigh Barty 6-2, 6-4.
Kuznetsova, a two-time Grand Slam champion who has been hindered lately by injury, will be in search of her 19th WTA title — and her first in more than a year — when she takes on American Madison Keys in the final.
Keys, the 2017 US Open runner-up, defeated compatriot Sofia Kenin 7-5, 6-4.
Kuznetsova denied Barty a chance to reclaim the world number one ranking, which the Australian would have done by reaching the final.
Instead the triumph by 34-year-old Kuznetsova leaves injured Naomi Osaka atop the rankings with the US Open starting a week from Monday.
Barty, who had rallied from a set down in each of her previous two matches, was off the boil against Kuznetsova, who is back on form after several seasons of injuries, including a wrist problem.
“This was a week that I battled through,” Barty said.
“At times I played some good stuff. At times I played some pretty awful stuff.
“I’ve learned a lot from this week, and there are nothing but positives going into New York.”
Keys booked her finals spot as she won an all-American match littered with 12 breaks of serve.
She earned match points with a flick volley winner angled steeply cross-court and amazed herself with the get.
“I looked at my box in shock,” she admitted.
“I’m really feeling great about my tennis.
“When I was down break points in the second set, I was just thinking that I knew I could break back, that was my biggest thought.
“I’m super-happy to be in my first final here. I love getting matches under my belt before a Grand Slam.” (AGENCIES)