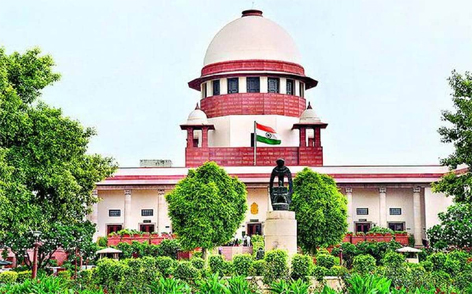 NEW DELHI,  Aug 9:  The Centre has moved the Supreme Court seeking modification of its August 3 order passed concerning elections for the executive committee of All India Football Federation and inclusion of ex-players in the electoral college saying FIFA and Asian Football Confederation (AFC) have “strong reservations in the member structure of AIFF”.

The application filed by the Ministry of Youth Affairs and Sports said, “it is respectfully submitted that the membership structure in the order dated August 3, 2022, appears to be not meeting the approval of FIFA/AFC, which aspect, if not resolved with the modification in the aforesaid order dated August 3, may defeat the very purpose for which such exercise was so kindly initiated by this court”.

It added, “that from a collective reading of correspondences, it emerges that FIFA/AFC have strong reservations in the membership structure of AIFF”.

It said, “That in the light of forestated development, it appears that notwithstanding the best efforts of the CoA, this court and the cooperation extended by other stakeholders, the inclusion of new members (36 sports persons) into the membership structure of AIFF, the desired purpose may not have been achieved requiring a fresh look into this aspect by this court so as to facilitate the prime objective of retaining the hosting rights of the women’s U-17 World Cup”.

The Centre sought modification of the order dated August 3, to the extent of stating that interim arrangement of elections to the executive committee of the AIFF be held as per the time schedule already indicated in the order and “on the basis of the pre-existing membership structure of the AIFF”.

It further prayed, “Modify the order dated August 3, to the extent of stating the draft constitution as it stands on the date of elections, shall be subject to the finalization only after taking into consideration the objections of all relevant stakeholders and after further taking into consideration, the response of the applicant, in the wake of such objections which may surface of the present proceedings”.

The Centre pointed out to the top court that after the August 3, order, FIFA had addressed a letter to the AIFF on August 5 and stated that a roadmap was already agreed upon between the AIFF and FIFA by way of letters dated July 1 and letter of reiteration dated July 25.

It said that in terms of such a roadmap, the AIFF was required to hold a special general assembly in the first week of August 2022 to approve the new statute for the AIFF.

The ministry further quoted the letter of FIFA, “The order of the Supreme Court dated August 3, 2022, appears to have caused certain deviations from the roadmap agreed to between AIFF and FIFA and the same, “if considered to be true, would irrefutably jeopardise the mutual understanding which was displayed so far on the steps forward”.

It added that the AIFF is statutorily required to independently manage its affairs, uninfluenced by any third parties- references in this regard are placed upon Article 14.1 (i) and Article 19.1 of FIFA statutes.

“Upon examination of the transcript of the order of the Supreme Court, if severe deviations are found from the roadmap, the matter would be submitted to the relevant authority for further considerations including the suspension of the AIFF and the withdrawal of the hosting rights for the 2022 FIFA-U-17 Women’s World Cup in India”, the government said while referring to the letter of FIFA.

The application said that on August 7, the Centre received representations from several state federations, and during deliberations, it received copies of correspondences.

On August 3, the top court directed for holding of elections expeditiously to the executive committee of the AIFF as per the schedule proposed by the Committee of Administrators (CoA).

The top court had said that the Electoral College for the executive committee of AIFF would have representatives from 36 state football associations and 36 representatives of eminent football players.

The top court said that the national sports code cannot be read in a manner of the statute and a holistic understanding of its provisions has to be arrived at to effectuate its intent and purpose.

“In this backdrop, consistent with the need for the healthy development of the sports of football in India, the inclusion of eminent players, who actually represented the country, would be of immense benefit for ensuring the growth of the sports in a healthy and orderly manner”, it had said.

The apex court had on May 18 appointed a three-member CoA headed by former top court judge Anil R Dave to manage the affairs of the AIFF and ousted NCP leader Praful Patel-led executive committee which had overstayed its four-year term by two years.  (PTI)