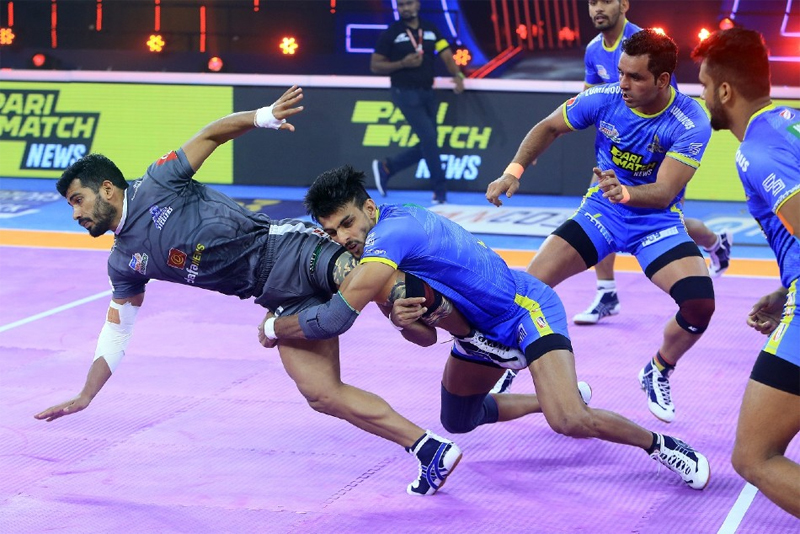 BENGALURU,  Feb 8: Ashish was the star for Haryana Steelers as they beat Tamil Thalaivas 37-29 in the Pro Kabaddi League here on Tuesday.

All-rounder Ashish had a night to remember, picking up 16 points — including three tackle points — and helping his Steelers team overcome a tough Thalaivas unit to jump to second on the standings.

Ashish was supported well by his captain Vikash Kandola with eight points. Coach Rakesh Kumar didn’t even have to use the likes of Meetu and Rohit Gulia from the bench as his Haryana team once again showed why they are rated among the best.

Haryana started the match on the front foot with their cover defender duo of Jaideep and Mohit in form. There was no place for Surender Nada in the Haryana starting line-up as coach Rakesh Kumar brought in Akshay.

Together, they kept the Tamil raiders away while at the other end Vikash Kandola and Vinay brought the points. The Steelers got their first ALL OUT in the seventh minute to open an eight-point lead.

But the Thalaivas slowly made a comeback through their raiders Ajinkya Pawar and Manjeet. The former was impressive in do-or-die situations which helped Thalaivas end the first half on a positive note. The scores were 15-12 in favour of the Steelers at the interval.

Unfortunately for the Tamil team, they could not convert that momentum into an ALL OUT as Haryana fought back in the second half. Ajinkya Pawar kept picking up points for Thalaivas, but Ashish’s three-point Super Raid close to the fifth minute after restart shifted the balance once again to the Steelers.

But Ashish first produced a tackle on Ajinkya Pawar and then got a valuable raid point to help Haryana clinch another ALL OUT with five minutes remaining. That opened the lead to six points once again.

The careless defending by Thalaivas in the final raid means they walked away with no points from the match.

Sachin (16 points) and Guman (11 points) were in top form for the three-time champions as they consolidated their position on top of the table with a comfortable victory.

U Mumba’s Abhishek Singh (13 points) and Ajith Kumar (11 points) got their Super 10s but their team-mates, especially captain Fazel Atrachali, struggled to provide the support from the defence.

The high-scoring first half belonged to the Patna Pirates despite a mini fightback from Mumbai.

The Patna raiding trio of Guman, Sachin and Prashanth Rai started positively and gave them an early lead.  (PTI)

Crime against women on increase in J&K: NAUP