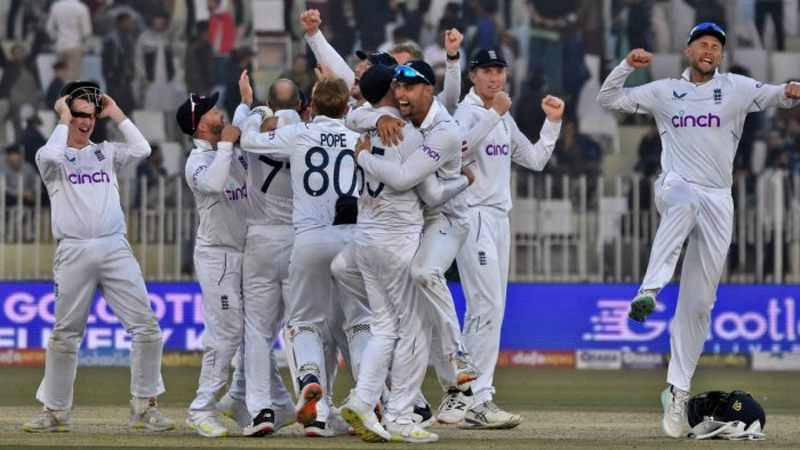 RAWALPINDI, Dec 5: England showcased its masterful approach of aggression in Test cricket with a superb 74-run victory over Pakistan in the final session of the first Test on Sunday.
Needing 263 runs with eight wickets in hand on Day 5, Pakistan was dismissed for 268 against the reverse swing of James Anderson (4-36) and Ollie Robinson (4-50) — losing its last five wickets for just 11 runs after tea.
Jack Leach wrapped up the game by having the last wicket of Naseem Shah, trapped leg before wicket, after England delayed the second new ball for well over an hour with Anderson and Robinson doing the damage with the old ball.
Pakistan also succumbed to the relentless attacking field settings of England captain Ben Stokes throughout the final day before Robinson and veteran Anderson sliced through the lower order with the host needing 86 runs.
“What we’ve had to deal with coming in makes this win even better,” Stokes said, referring to a virus that hit half of his teammates on the eve of the match before they recovered in time for England’s first test in Pakistan in 17 years.
“We wanted to come here and carry on with our mantra of exciting cricket and giving ourselves an opportunity to win. We’ve no interest in drawing.”
The win on a docile Pindi Cricket Stadium wicket firmly underlined England’s fearless aggressive approach under new coach Brendon McCullum, which saw them win six of the seven test matches back home this summer.
Robinson exposed Pakistan’s long tail soon after tea when he had Agha Salman (30) trapped leg before and then Azhar Ali (40) fell in the fielding trap when Joe Root grabbed a low two-handed catch in the leg slip.
Robinson had earlier ended the nearly four-hour defiance of one of the four Pakistan debutants – Saud Shakeel – in the second session to a brilliant diving catch by Keaton Jennings as the lefthander top-scored with 76.
Anderson broke the 87-run stand by having Mohammad Rizwan caught behind off a delivery which moved a shade outside the off stump and took the outside edge of the bat as England kept on coming hard at the Pakistan middle-order.
Earlier, Anderson denied Imam-ul-Haq a half century after Pakistan resumed on 80-2 and reached 169-3 in the first session.
Shakeel completed his fifty while Rizwan, who took 45 minutes before scoring his first runs off the 24th ball he faced, reached 42 off the next 62 balls. But Stokes stuck to his plan of placing fielders close to the Pakistan batters.
Anderson had Imam caught down the legside by wicketkeeper Ollie Pope in the day’s sixth over as the lefthander tried to work the fast bowler off his hip.
Stokes dried up the runs by placing men close to Rizwan’s bat on both sides of the wicket, before the batter accelerated against the spinners to help Pakistan make 89 runs in the day’s first session.
England had posted an electrifying 657, including a world-record 506-4 only on Day 1, and Pakistan responded with 579 to concede a 78-run lead on a grass-less wicket where seven batters from both sides scored centuries.
England made a bold declaration with another rapid 264-7 in just 35.5 overs on Day 4 and set Pakistan a challenging target of 343 in four sessions.
“We had an opportunity to win, but we couldn’t get partnerships going,” Pakistan captain Babar Azam said.
“Our bowling was inexperienced and we didn’t bowl in the right areas in the first innings, but still we had a chance to chase down the total, but we missed the golden opportunity.”
England leads the three-match series with Multan hosting the second game from Friday, followed by the test at Karachi. (AP)