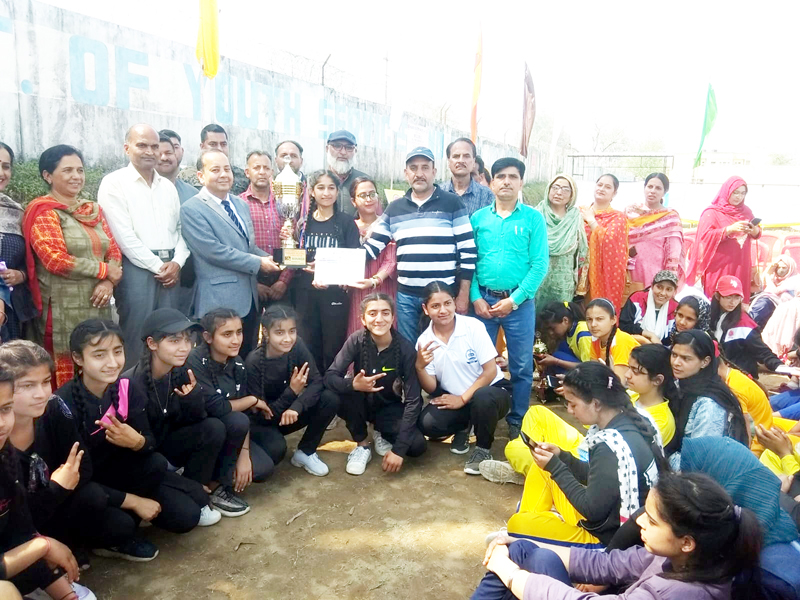 Excelsior Sports Correspondent
JAMMU, Mar 13: Outplaying District Jammu in an easy contest in the summit clash, District Udhampur lifted the title trophy of the Under-19 Girls Volleyball Tournament, organised by the Department of Youth Services and Sports (DYS&S), which concluded at Khel Gaon, Nagrota, near here today.
Deputy Director, YSS Jammu, Jitender Mishra was the chief guest at the closing ceremony, who honoured the winners by presenting them certificates and trophies. The chief guest was accompanied by the DYSSO Jammu, Sukhdev Raj Sharma, under whose supervision the event was held.
The tournament in which 17 districts from across the Union Territory took part, was held under the patronage of the Director Youth Services and Sports, Gazanfar Ali.
Earlier, District Udhampur defeated District Jammu by (3-0) in the title clash to win the trophy and the scores were (25-15; 25-08; 25-17). Meanwhile, District Rajouri bagged the third place by drubbing District Baramulla by (2-0) in a close contest in the hardliner and the scores were (25-16; 25-23).
The matches were officiated by a panel of experts of the department concerned.
The chief guest, while presenting certificates and trophies to the winners, said that the Government takes every possible step in promoting sports and games in the Union Territory, adding that there is still a lot of scope for improving facilities for the players. He praised the organisers for better technical, food and boarding and lodging arrangements.
Mishra further said that such tournaments serve as a launching pad in honing the skill of the players to compete at the higher levels.