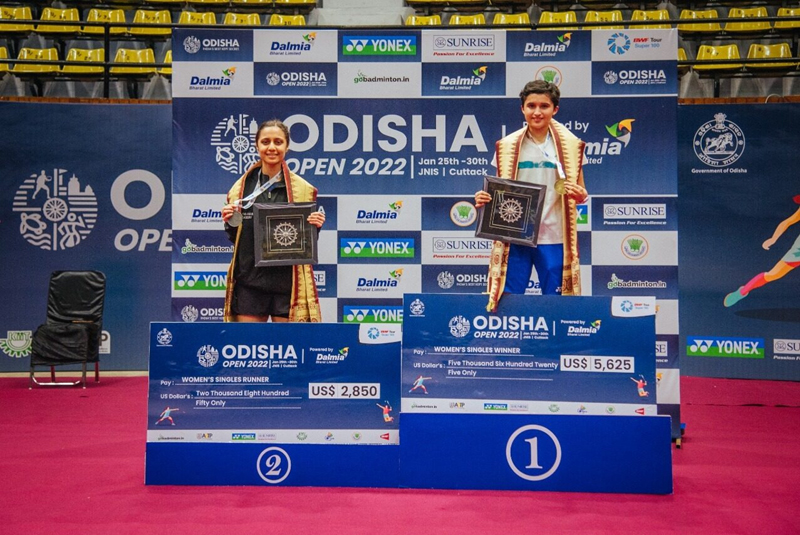 Producing an excellent performance to emerge triumphant in her event, the 14-year-old Unnati won 21-18 21-11 to be crowned champion in the inaugural edition of the USD 75,000 Odisha Open.

The 21-year-old George prevailed over fellow Indian Priyanshu Rajawat 21-15 14-21 21-18 to clinch the men’s singles title after battling hard for 58 minutes.

But in the mixed doubles final, India’s MR Arjun and Jolly suffered a 16-21 20-22 defeat at the hands of the Sri Lankan duo of Sachin Dias and Thilini Hendadahewa in a match that lasted 36 minutes.

There was also no Indian victory in the men’s doubles summit clash as the Malaysian duo of Nur Mohd Azriyn Ayub and Lim Khim got the better of the host nation’s Wah Ravikrishna PS and Sankar Prasad Udayakumar 18-21 21-14 21-16. The keenly-contested men’s doubles match lasted 51 minutes.

Unnati, who entered the final after she surprised Indian Open finalist Malvika Bansod 24-22 24-22 in the last-four clash on Saturday, took 35 minutes to get the better of Toshniwal in the summit showdown of the women’s singles at the Jawahar Lal Nehru Indoor Statdium.

Unnati claimed the the first game after making a comeback and riding on the momentum, she won the second game without much difficulty as Toshniwal had no answer to her opponent’s aggressive approach.

Unnati, who had made her debut on the senior international circuit only in October last year, began the match on the backfoot and trailed 11-7 at the first mid-game interval.

The shuttler from Rohtak, however, fought back to level the score and won three successive points to win the first game after the scores were level at 18-18.

Hooda had made the final of the India International Challenge last October.

George won the opening game quite comfortably and was leading 5-3 in the initial phase of the second game, but Rajawat fought back brilliantly to take the match into the decider.

The battle was intense in the third and final game with Rajawat trying his best to not allow George have his way.

However, the 19-year-old Rajawat fell short in the end as George kept his composure to win it and have the last laugh.

On his way to the final, George also stunned third seed and the higher ranked Subhankar Dey in the quarterfinals.  (PTI)