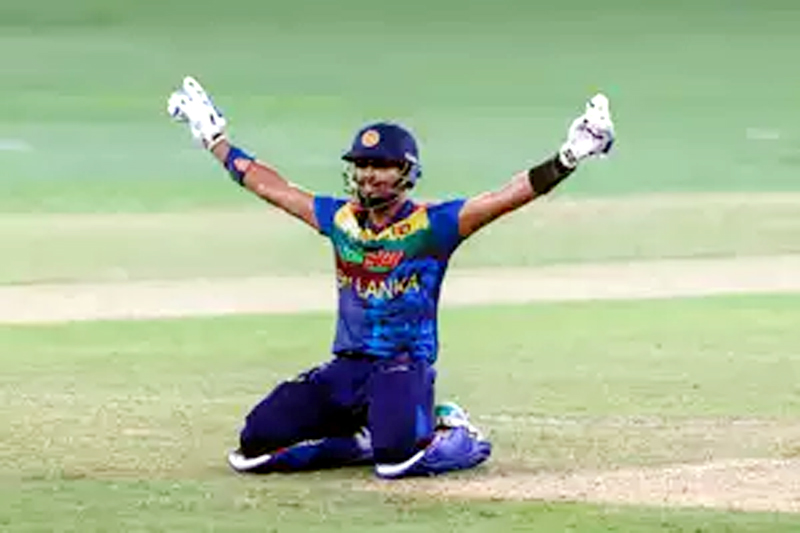 DUBAI, Sep 9:  Opener Pathum Nissanka slammed an unbeaten half-century to complement a superb bowling show as Sri Lanka overcame a shaky start to beat Pakistan by five wickets in the final Super 4 clash of the Asia Cup here on Friday.

Chasing a paltry 122 in the dress rehearsal ahead of Sunday’s summit clash, Sri Lanka were reduced to 29/3 inside five overs but the 24-year-old Nissanka held the innings together with his unbeaten 55 off 48 balls.

Mystery spinner Wanindu Hasaranga led Sri Lankan’s brilliant bowling effort with a three-wicket haul as Pakistan were bundled out for 121 in 19.1 overs.

Hasaranga returned with 3/21 including two in successive balls in his last over as the Sri Lankan spin troika accounted for 5/60 in 12 overs.

The spinner, who also took two catches in the deep, iplayed a fine cameo smashing two boundaries off three balls in his 10 not out from three balls to take them over the line with three overs to spare.

Defending a below par total, Pakistan’s pace and swing was on full display inside the powerplay as the duo of Haris Rauf and Mohammad Hasnain claimed three wickets between them.

Hasnain gave them a perfect start dismissing Lankan leading run-getter Kusal Mendis for a golden duck  with a fiery outswinger.

His pace partner Rauf struck twice in two overs to tighten the noose around Sri Lanka but it was Hasan Ali who was the weak link in their pace armoury in absence of Naseem Shah.

His slower pace failed to trouble the batters and the duo of Nissanka and Rajapaksa were happy to go all out against him to rebuild their innings.

The duo put together a crucial stand of 51 runs before Bhanuka Rajapaksa (24) fell victim to Usman Qadir before skipper Dasun Shanaka chipped in with 21 from 16 balls to take them near the finishing line.

Needing 15 runs from the last four overs, Hasnain dismissed the Lankan skipper with a slower ball before Hasaranga hitting the winning four.

Earlier, the off-spin duo of Maheesh Theekshana (2/21) and Dhananjaya de Silva (1/18) were at their tidy best restricting Pakistan to a below-par score after birthday ‘boy’ Dasun Shanaka opted to field.

The wily Hasaranga deceived Babar Azam with a slower one when the Pakistan skipper stepped out only to be cleaned up. Hasaranga also took two catches in the deep.

The stage was just perfect for Azam to get back into form.

But the star batter, who has just 33 runs from four innings in the Asia Cup, looked under pressure after Mohammad Rizwan (14) and Fakhar Zaman (13) got out cheaply and got out for a 29-ball 30.

The spinners then stymied the flow of runs in the middle overs and it was a big ask for the tailenders to take Pakistan near the 150-run mark.

Debutant Pramod Madushan started it all, claiming the prized wicket of in-form Pakistani opener and No 1 T20I batter Mohammad Rizwan (14) inside the power-play.

It was almost two in two balls for Madushan when out-of-form Azam mistimed the next delivery but the ball just flew over the cover region. Madushan finished with a memorable 2/21 from his 2.1 overs on debut.

With the pressure mounting, Fakhar Zaman tried to break free only to hole out at sweeper cover region. Pakistan lost their last five wickets for 30 runs.  (PTI)