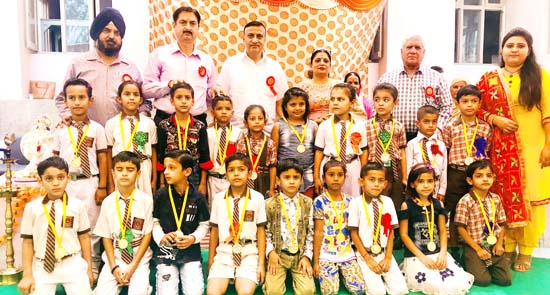 Excelsior Correspondent
JOURIAN, May 19: Senior Vice President, J&K PCC and Former Minister, Sham Lal Sharma said that schools should focus on moral values rather than mere education to the students.
Mr Sham said this while speaking on the 27th Foundation Day cum Prize Distribution celebration of Tiny Aspirants Public Higher Secondary School, here today.
Sham, who was the chief guest on the occasion, asked the school management to always take the initiative for proper education and guidance for children as they are the future leader of the country.
The programme commenced with the lighting of the ceremonial lamp of knowledge. Puran Lal Pandita, Station Officer, Fire Station Akhnoor, NP Singh Principal and KC Bhagat were present on the occasion.
The celebration began with welcome of guests and bouquet presentation by the members of School Management.
The programme commenced with Saraswati Vandana to seek blessings of Almighty, which was followed by an elaborate ‘Award ceremony’, wherein all the achievers were felicitated with prizes, medals and trophies by the chief guest.
Mr Sham Lal said that the Dogri language has found place in the 8th schedule of the Constitution and the fact that the J&K high Court has impressed upon the state to give due place to Dogri language, adding in order to promote this language, Dogri should be taught in the schools from the beginning to make students well versed with the language.
He said integrating Dogri with education, in general and at primary level in particular, will act as catalyst for popularizing this language among the youngsters.
He also stressed that parents should freely interact with their children in local language to promote it from the homes.
Sham expressed his unhappiness over the recent disappointing results of various government schools particularly Akhnoor, Khour, Chowki Choura zones and exhorted that strenuous efforts should be made by the government to provide quality education in the state.
Later, Sham Sharma along with Principal Seema Sharma distributed prizes among the students excelling in academic as well as extracurricular activities.