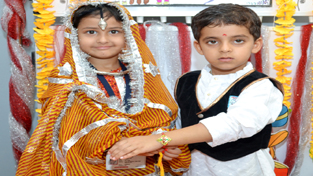 Excelsior Correspondent
JAMMU, Aug 20: Various schools of Jammu City celebrated Raksha Bandhan in their own ways, here today.
Rich Harvest School, Jammu celebrated Raksha Bandhan festival with great enthusiasm.
On the occasion Ruchi Charak, Trustee of the School and other staff members were present.
The School organized a special event to educate students about the significance of this festival.
Students wore colourful traditional Indian dresses. Rakhi making activity was organized in school and the children were told about the sacred bond between brother and sister. Students were familiarized with the customs and rituals followed on Raksha Bandhan. Girls tied rakhi on the wrist of boys. Girls after tying rakhi offered candies to boys and boys gave gifts in return.
JK Little Millennium Playway School, Tirth Nagar, Talab Tillo, Jammu celebrated Raksha Bandhan festival with great fervour and enthusiasm. Students were present in colorful dresses and were excited since morning. Girls tied Rakhi at wrist of boys who in turn offered gifts for new eternal bond of holy love between brother and sister. Teachers preached the students about significance of the festival and exhibited the bond love by puppet show and story telling.
Parents participated in the event by sending beautiful messages by their kids to exchange while the sisters were tying Rakhi to boys.
Students showed keen interest in the occasion and beautiful environment was made full of joy and love. The sketch of coloring sheet was sent to the parents by the school to fill colors of their choice and most decorated coloring sheet was selected and appreciated.
The event was organized by Henry Don, Chief Learning officer, Little Millennium, Educomp, Gurgaon with support of Achint Kour Center Coordinator and other Facilitators.
Rajni Gupta, Managing Director, JKMS, Jammu presented vote of thanks.
JK Montessorie school celebrated Raksha Bandhan in the school premises today.
The function started with interactive session with the school children and teachers about the background and importance of Raksha Bandhan.
The students were explained the importance of the festival which strengthens the ties between brothers and sisters. Sweets were distributed among the students.
To mark the occasion of Raksha Bandhan, a Rakhi making and group kite making competition was held at Lawrence Public School, Jammu.
Students from both Panjirthi and Sidhra branch participated in this competition.
Students from all four houses put in their best efforts to prepare colourful and esthetically designed rakhis and kites in this competition. The first prize in Rakhi making competition was bagged by Aditi Athmia of Courage House, second prize went to Prachi Khajuria of Loyalty House and third prize went to Niketha Samanto of Courtesy House.
In group Kite making competition, the first two prizes were bagged by Aman Kaul, Karan Bhat, Ashish Raina, Vishal Kaul and Devraj Sharma of Peace House, while the third prize went to Yigneshwar Singh Jamwal and Rahul of Courage House. The program concluded with students tying rakhis to each other.
Students of Global Convent organized a special event to educate the children about the significance of the festival ‘Raksha Bandhan’.
The basic theme behind organizing this event was to increase creativity of students. Children were familiarized with the customs and rituals followed on Raksha Bandhan .
Students made Rakhis in school and were told about the sacred bond between a brother and sister and as to how rakhi symbolizes the sister’s love and prayers for the brother’s well-being and his life long vow to protect her.
Mona Pandoh, founder of the school was present on the occasion.
U.P. Hr. Sec. School, Channi Himmat students celebrated Raksha Bandhan at Indo-Pak International Border at Suchategarh
Shiva Public Hr. Sec. School, and Nav Yug Hr. Sec. Upper Shiv Nagar also celebrated Raksha Bandhan with religious fervour.