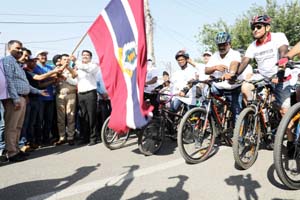 JAMMU, Apr 29: In its endeavour to spread the mission of road safety on the  eve of celebration of  29th National Road Safety week 2018, Motor Vehicles Department today organised a cycle rally from University of Jammu  which was flagged off by  Saugat Biswas Transport Commissioner J&K with 92.7 Big FM as its media Partner.
More than 250 participants from different parts of Jammu Division participated in the rally which also included famous Jammu Cyclists Group. The rally which started from University of Jammu passed through Police Headquarter Chowk, Bikram Chowk, Satwari Chowk, Green Belt Park Chowk, Ambedkar Chowk, Police Headquarter Chowk and culminated at University of Jammu.
The young cyclists while passing through different roads in colourful dresses were the eye catchers and giving the message of the theme of Road Safety Week “Sadak Suraksha Jeevan Raksha”.  Saugat Biswas, while speaking at the occasion briefed that Department has organised the awareness programmes throughout the week and the cycle rally was taken out today as last event of the week long programme which will conclude tomorrow to give the message that road safety is the concern of everyone and while driving we should take extra care of cyclists who are promoting the pollution free Jammu slogan.
SSP Traffic Jammu , Joginder Singh who was also present at flag off ceremony appealed  the people to follow the traffic rules and help them to serve the Department in better way.    Deep Raj RTO Jammu informed that the message of today’s cycle rally was to promote pollution free essence in the mind of peoples as cycle riding helps us to curb pollution level and also keep us physically fit.    M J Juhi, Monika, Cluster Head Vikrant also spiced up the rally and promoted the cause of Road Safety in many events during the week.  Anil Sharma from Jammu Cyclists Group also said that their aim is pollution free Jammu and we are working for its cause.
In the end cycles were also distributed by Joint Transport Commissioner,  Vikas Sharma through draw of lots among the participants. Those who won the cycles in the event were Tushar Pandey, Rajveer Singh, Rajveer Chopra, Navjot Singh and Samarjeet Singh which were sponsored by Tata Motors. Others who attended the programme included Rashi Dutta, Assistant Transport Commissioner, ARTOs  Jugal Sharma, Shafqat Majeed, Rajesh Gupta, Pawan Sharma MVIs and other staff members.