JAMMU, May 3: Regional Passport Office (RPO) Jammu today released the first edition of annual Hindi Magazine ‘Tavisha’.
Rashmi Ranjan Swain, Director General of Police (CID) J&K released the maiden edition of the magazine following Corona protocol.
Speaking on the occasion RP Officer, N.K Shil said officials of his office worked very hard and made their valuable contributions in compiling and accomplishing the first edition of the Hindi Magazine themselves.
He said that prime objective of the magazine is to promote the use of Hindi in official and private work, besides display of literary creative work of staff and their families.
Shil said that focus is also on to brief readers regarding basic passport application procedures.
He lauded the hard work by co-ordinators-Gaurav and Diwakar for the successful compilation and accomplishment of the publishing job.
Shil said that he would keep his effort to continue this special supplement in future in order to enrich staff aesthetic value.
Rashmi Ranjan Swain, DGP CID lauded the efforts of passport officials for their artistic work and valuable passport making messages depicted in the magazine. The brief inauguration event ended with vote of thanks. Few staffers of PO Jammu and CID were present on the occasion. 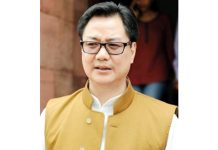 Central team to visit Jammu on Sunday to assess reasons for surge in Corona...