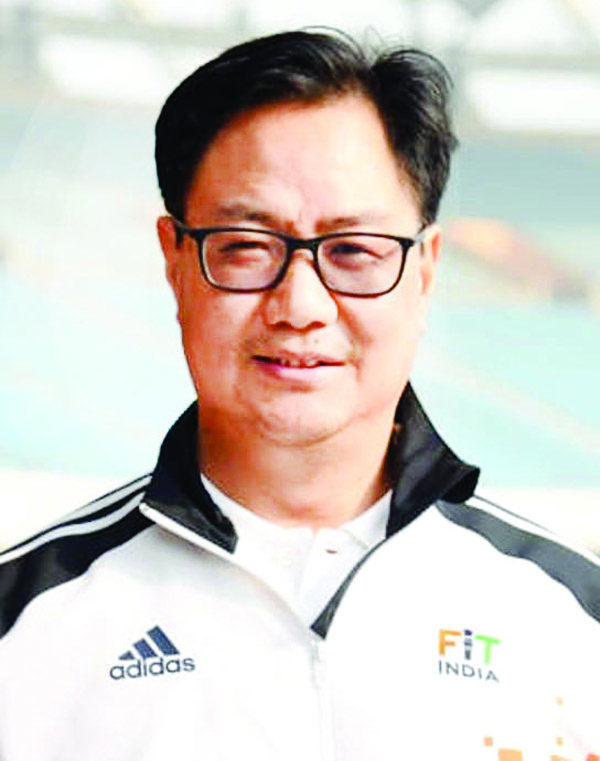 New Delhi, Jul 12: Union Sports Minister Kiren Rijiju will hold discussions with sports ministers of all states and union territories from July 14 to figure a way forward as sporting activities begin to resume amid the gradual lifting of the COVID-19 lockdown.

The two-day online meeting will review the action taken during the pandemic, and discuss resumption of sporting activities at the state level along with identification of budding talent through competitions at block and district levels.

“The country is in the second phase of unlock now and it is important to have a dialogue with the states to align the way forward for sports and youth related activities,” Rijiju said in a statement.

The national camps of athletics and weightlifting have restarted, while boxers will resume training in the next couple of weeks amid strict health safety measures. The camps were brought to a halt mid-March because of the lockdown to contain the deadly pandemic, which has caused more than 22,000 deaths in the country.

“During the lockdown, activities of both youth affairs and sports have continued keeping in mind the larger goals that have been set,” Rijiju said.

Rijiju also praised the 75 lakh volunteers from Nehru Yuva Kendra Sangathan (NYKS) and National Service Scheme (NSS) who have helped the civic bodies in country’s war against the dreaded virus.

“Our NYKS and NSS volunteers have worked relentlessly alongside civil bodies to help in the fight against COVID-19.

“About 75 lakh volunteers across India have been involved in creating awareness about safety and health guidelines, distribution of masks, helping the elderly among many other things,” he said.

“Their contribution in this fight against the pandemic has won them praise from various state governments,” he added.

He also spoke about the online classes which received good response from athletes.

“In sports too, despite closure of on-field training, online training has been conducted for athletes of all levels as well as for coaches, so that athletes and coaches could remain closer to the sport,” Rijiju observed.

“We want to assess the impact of all these activities and also plan the way forward, in collaboration with the states,” he added.

During the meeting, inclusion of fitness and sports in the curriculum of schools across the country will also come up for discussion.

The two-day meet will also deliberate on plans to conduct Khelo India events and Youth Festivals later this year or early next year.

“The Sports Ministry has already decided to set up Khelo India State Centre of Excellence (KISCE) in all states and UTs. Further, 1000 Khelo India Centres (KIC) at the district level will be set up to enable local talent to be identified and trained in 14 identified Olympic sport and traditional sports.

“Also, the one state, one sport policy that the government has made needs to be discussed and implemented early.”

The states have been divided into two groups to cover the two days to allow every participant time to discuss their issues during the meeting. (PTI)