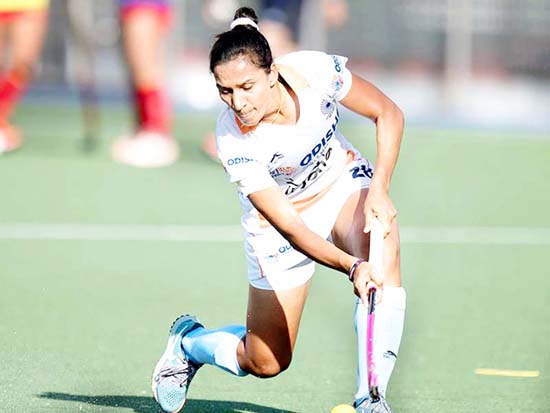 Madrid, June 16:
Skipper Rani Rampal scored a late winner as Indian women’s hockey team dished out a spirited performance to beat Spain 3-2 in the third game and register their first win of the five-match series at the Consejo Superior de Deportes Hockey Stadium here.
By virtue of this win late last night, India and Spain are now tied 1-1 in the series. While Spain beat India 3-0 in the opener, the second game between the two sides finished 1-1.
The fourth match of the series will be played later tonight.
In last night’s game, Spain took an early lead through Maria Lopez’s strike from their second penalty corner in the third minute.
The hosts continued to test the Indian defence in the first quarter and goalkeeper Savita was called into action soon when she made a fine reflex save to deny Spain.
The Indians started to get into the game in the second quarter as both teams battled for possession.
The visitors defended their lines well, keeping out Spain’s third penalty corner in the 19th minute.
World no. 10 India made some good forays in the closing stages of the quarter, forcing Spanish goalkeeper Melanie Garcia to make a fine save in the 25th minute.
The Indians kept up the pressure on the Spanish defence and won a penalty corner which was converted by Gurjit Kaur in the 28th minute as both the teams went into the half-way break tied at 1-1.
India started on a bright note after the change of ends and produced a great move to score a well constructed field goal through young striker Lalremsiami in the 32nd minute.
Forward Vandana Katariya also got an open chance in the 42nd minute but could not score in her 200th International cap.
A tense final few moments of the match saw the hosts put the Indian defence under constant pressure, winning two penalty corners, the first of which was saved by goalkeeper Savita.(PTI)

Fresh Avalanche In Gulmarg, No Report Of Any Loss