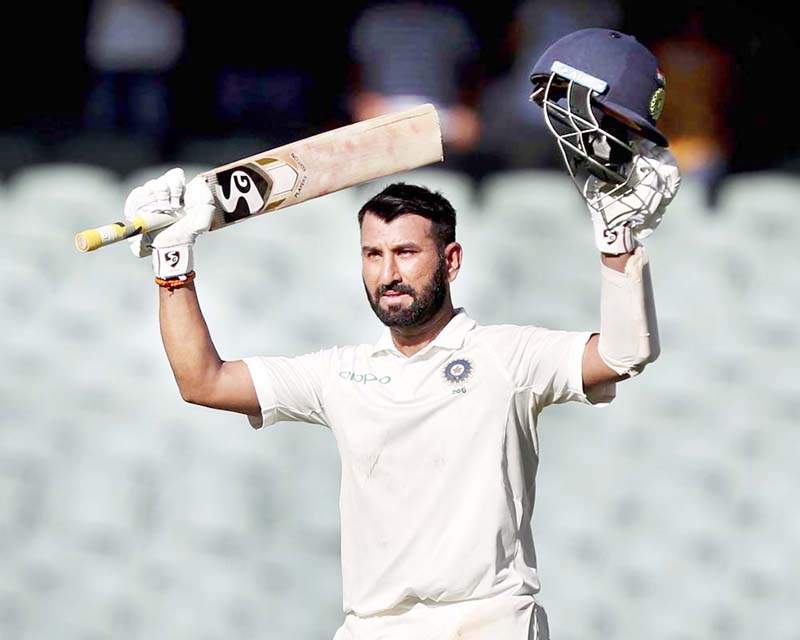 Adelaide, Dec 6: Cheteshwar Pujara rose to the occasion with a maiden century in Australia, pulling India out of a deep hole to a respectable 250 for nine on day one of the first Test here today.
Pujara showed the same grit and gumption that is typical of him en route a 246-ball 123 that kept India in the game after being reduced to 127 for six in the 50th over.
It took a brilliant direct from Pat Cummins to remove him on what happened to be the final ball of an absorbing day one of the four-Test series.
Skipper Virat Kohli opted to bat in ideal conditions but the top-order once again failed to apply themselves against the potent pace trio of Mitchell Starc, Josh Hazlewood and Cummins.
Anything close to 250 looked a mountain to climb with India reeling at 56 for four at lunch. But Pujara stood tall amid the ruins to save India from embarrassment on way to his 16th Test ton. His fighting effort comprised seven fours and two sixes.
The 30-year-old put on two crucial partnerships with the lower-order batsmen to ensure India give their bowlers something to bowl at.
Post tea, Pujara added 62 runs with R Ashwin (25) for the seventh wicket. The latter played watchfully, unlike the Indian top-order, and played a great role in this minor recovery.
Cummins (2-49) finally got the breakthrough in the 74th over when Ashwin edged to second slip. Ishant Sharma (4) then put on 21 runs with Pujara, pushing the score past 200 in the 79th over.
Ishant survived a loud lbw shout via DRS, but Mitchell Starc (2-63) bowled him with a fuller delivery thereafter. As he started to run out of partners, Pujara hit a few lusty blows to gather some quick runs.
Earlier, Pujara’s effort was the sole silver lining after India were reduced to 143-6 at tea. This was after a horrendous shot selection by Rohit Sharma (37) left India in the lurch at 86 for five in the 38th over.
Post lunch, Rohit and Pujara started off well as they added 45 runs for the fifth wicket.
While Pujara was sedate at one end, the former took the lead in scoring as he hit sixes at will. Two came off Cummins; the first a pull shot that sailed for six and the other a proper cover drive that cleared the ropes as well.
It seemed that Rohit was intent on digging India out of this hole as he hit Nathan Lyon (2-83) for a six on the second ball of the 38th over. Marcus Harris almost caught it, with the ball barely crossing over the ropes and the umpire took some time to call it a six.
That should have been a note of caution for the batsman, but he didn’t heed it and skied the very next ball for Harris to take an easy catch in the deep.

Rishabh Pant (25) too arrived at the crease with intent of attacking the bowling. He scored two fours and a six in the space of a few deliveries, before Pujara asked him to calm down.
The duo then added 41 runs for the sixth wicket as India crossed 100 in the 41st over, including five sixes surprisingly.
Pant didn’t look comfortable though as he was forced to play against his natural game. And it showed when he edged Lyon behind to be dismissed shortly before tea.
In the morning session, Hazlewood (2-52) reduced India to 56 for four. The Australian pacers struck regularly with the new Kookaburra ball and made inroads into the Indian top-order that never got going.
Hanuma Vihari was left out as the visitors drafted in Rohit for the number six spot. For Australia, Marcus Harris made his Test debut as announced a day prior.
Starc and Hazelwood began proceedings for Australia, and were on the money straightaway with their lengths.
Of the two Indian openers, KL Rahul (2) looked out of sorts against their express pace, and was unsurprisingly dismissed cheaply. He went for an extravagant drive in only the second over and was caught at third slip off Hazlewood.

Murali Vijay (11) looked intent on getting a better start and he was watchful. On a couple occasions, he drove the ball to get the score moving but ultimately this led to his dismissal. In the seventh over, Vijay went for a cover drive against Starc and only ended up edging behind.
Given the conditions, Kohli then walked out to bat a lot earlier than anticipated. He looked a lot more confident, but an awe-inducing diving catch ended his short stay at the crease.
Usman Khawaja dove to his left and held a stunning one-handed catch at gully off Cummins as Kohli was sent back with India reeling at 19-3 in 11 overs.
Pujara and Ajinkya Rahane (13) then came together for the fourth wicket, trying to put on a semblance of a partnership. Together they faced 59 balls and put on 22 runs in a bid to keep the scoreboard ticking.
Rahane had some difficulty against Lyon who came on to bowl immediately after the drinks’ break. The batsman then stepped out to even hit Lyon for a six over long on in his second over.
But this didn’t work against the pacers, who pushed Indian batsmen back with their perfect length and induced drives thereafter. In the 21st over then, Rahane fell to Hazelwood, the fourth batsman out driving in this morning session, and was caught at second slip. (PTI)