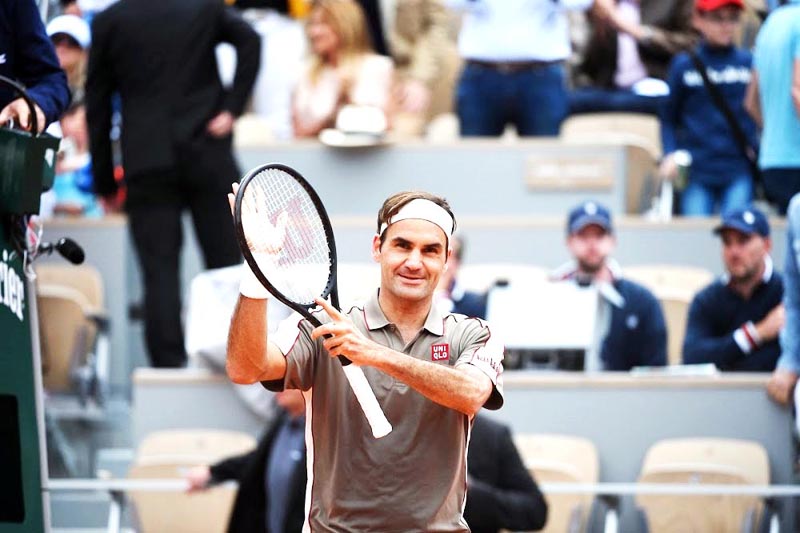 Paris, May 26: Roger Federer marked his return to Roland Garros after a four-year absence with a straight sets win over Italy’s Lorenzo Sonego on Sunday, admitting he “felt on edge”, as Angelique Kerber’s hopes of completing a career Grand Slam suffered a quick kill.
Federer, a 20-time major winner, hadn’t played the tournament since 2015 when he reached the quarter-finals.
However, on Sunday, it was as if the 37-year-old had never been away as he swept to a 6-2 6-4 6-4 victory in one hour 41 minutes on a packed, rebuilt Court Philippe Chatrier.
It was his 60th successive first round win at a Grand Slam.
“I felt on edge at the start, my heart was beating crazily,” said Federer, who hailed the new-look stadium which has been 90% rebuilt in readiness for the installation of a retractable roof for 2020.
“I felt great playing on this court. It looks very attractive, so congratulations to everyone involved.
“Hopefully I can play here again for my next match.” That match will be against German lucky loser Oscar Otte who won just his second match in eight years on the tour by seeing off Malek Jaziri of Tunisia 6-3 6-1 4-6 6-0.
“I would be surprised if Roger knew my name,” said Otte, the world number 145.
Federer broke serve five times and fired 36 winners past 24-year-old Sonego, the world number 73 who made the quarter-finals at the Monte Carlo Masters.
German fifth seed and reigning Wimbledon champion Kerber saw her hopes of a career Grand Slam ended by Russian teenager Anastasia Potapova.
Kerber slumped to a 6-4 6-2 defeat to 18-year-old Potapova who was making her French Open debut.
“Kerber is actually one of my idols, and when I was young I was looking for her game,” said the 81st-ranked Russian who hit 28 winners past her German opponent.
Kerber, 31, has now lost six times in the French Open first round.
The German left-hander had come into Roland Garros carrying a right ankle injury which forced her to pull out of the Italian Open and retire from her second round tie in Madrid.
“I didn’t have many expectations coming in,” said Kerber, who was broken six times in the match which brought the curtain up on the newlook Chatrier arena.
Potapova’s first win over a top 10 player gives her a second round clash against 19-year-old Marketa Vondrousova of the Czech Republic.
Greek sixth seed Stefanos Tsitsipas, who stunned Federer on his way to the Australian Open semi-finals and beat 11-time Roland Garros champion Rafael Nadal in Madrid, also made the second round.
The 20-year-old sixth seed brushed aside Germany’s Maximilian Marterer 6-2 6-2 7-6 (7/4).
The new Court Simonne Mathieu, a 5,000-capacity semi-sunken arena enclosed by greenhouses, was officially unveiled on Sunday.
It forms part of the 350 million euro upgrade of the entire site which will also see the demolition of the Court 1 ‘bullring’ after the 2018 tournament.
Spain’s Garbine Muguruza, the 2016 champion, had the honour of opening proceedings against America’s Taylor Townsend and the 19th seed marked the occasion with a 5-7 6-2 6-2 win.
“It’s cute,” said the Spaniard.
“It’s not small, but it’s, you know, cosy.” Other winners on the first day included Japanese seventh seed Kei Nishikori, a quarter-finalist in 2015, who eased past France’s Quentin Halys 6-2 6-3 6-4.
However, Italian 16th seed Marco Cecchinato, the man who sent Novak Djokovic crashing out in the quarter-finals in 2018, fell at the first hurdle.
Cecchinato lost to 37-year-old Frenchman Nicolas Mahut — who has slipped to 253 in the world — 2-6 6-7 (6/8) 6-4 6-2 6-4.
Canada teenager Felix Auger-Aliassime withdrew from the tournament with a thigh injury, just a day after finishing runner-up to Benoit Paire in Lyon.
The 18-year-old was seeded 25 and had been due to face Australia’s Jordan Thompson in the first round on his maiden appearance in the main draw in Paris.
Auger-Aliassime’s spot in the first round draw has been taken by Spanish lucky loser Alejandro Davidovich Fokina.
Second seed Karolina Pliskova closed play on Chatrier with a 6-2 6-3 win over Madison Brengle of the United States.(Agencies)