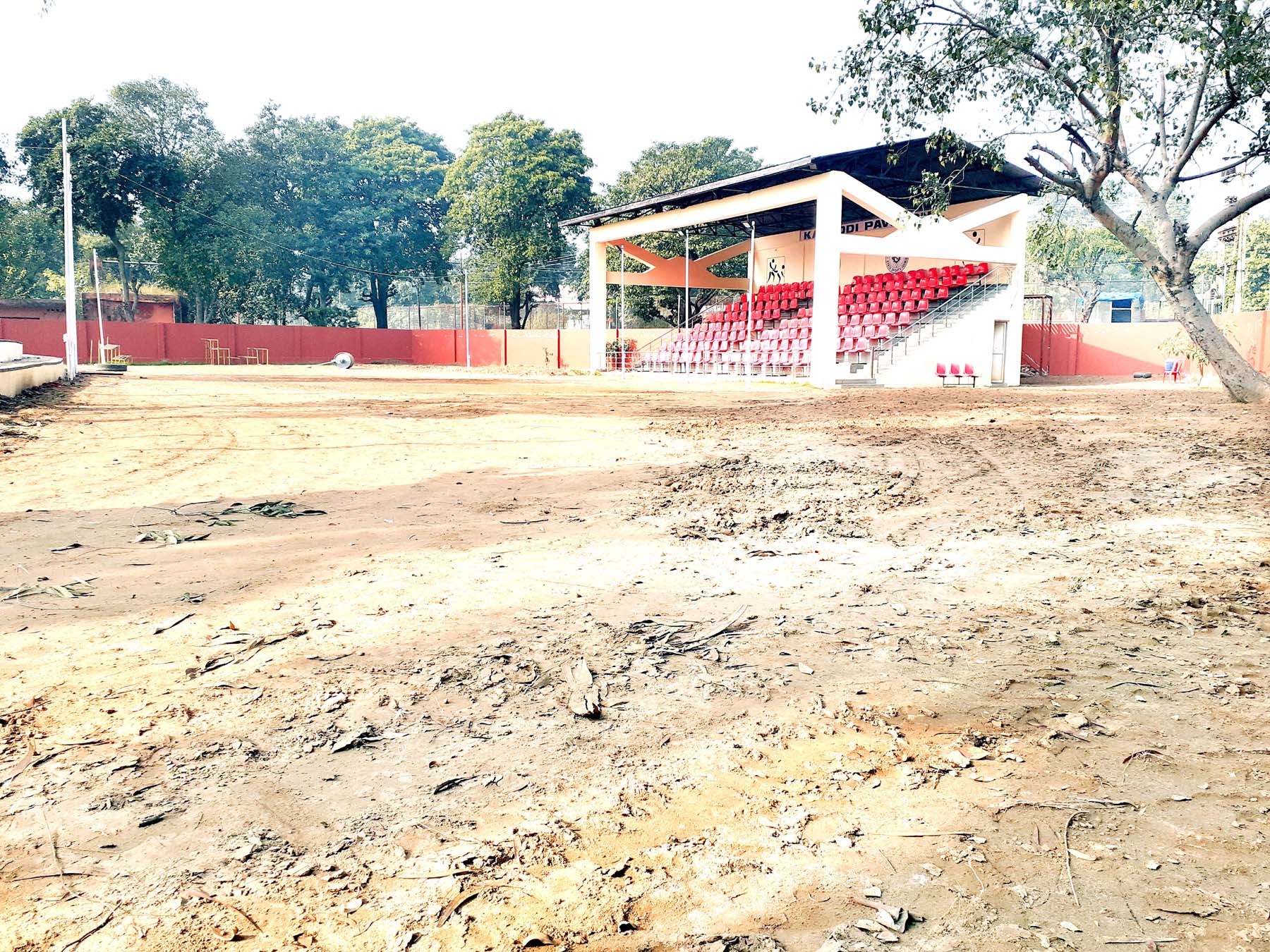 Goldi Sharma Asgotra
JAMMU, Jan 11: The indigenous game of the country Kabaddi is seemingly facing step motherly treatment in Jammu and Kashmir which is evident from the condition of the lone Kabaddi stadium, foundation of which was laid inside the premises of MA Stadium in the year 2006 but even after lapse of over 14 years it is still incomplete.
According to the well placed sources the construction of the lone Kabaddi stadium of Jammu province, was started on 22nd of February 2006, following the laying of its foundation stone by then Mayor of Jammu Municipal Corporation, Kavinder Gupta. During the time, Mayor was accompanied by Professor Chaman Lal Gupta, the then Minister of State for Defence and T R Gupta, the then president of Akhil Bharatiya Mahajan Shiromani Sabha and Manoj Pant, the then Secretary, J&K Sports Council (JKSC) and Kuldeep Kumar Gupta, the then General Secretary of J&K Amateur Kabaddi Association.
During the inauguration ceremony, the stadium was named Shere-Duggar Lala Hans Raj Mahajan International Flood Light Kabaddi Stadium. Thereafter, The Jammu and Kashmir Sports Council changed its name to Kabaddi Stadium, excluding the name of Lala Hans Raj Mahajan. At present, the stadium is under the control of JKSC, which has been looking after its development, up-gradation and other allied works for the last over 14 years.
Narrating about the official neglect being faced by the game, a senior player of Kabaddi, who has now joined the Jammu and Kashmir Police, informed that during the initial years, there was no permanent space allotted for holding classes as well as matches of Kabaddi.
The Council then allotted space for classes as well as practice in Government Girls School Gandhi Nagar. Thereafter, they shifted Kho-Kho to Green Field Gandhi Nagar and Kabaddi near Gymnasium hall of MA Stadium. In 2006, former Mayor Kavinder Gupta took initiative and laid foundation stone of Kabaddi Stadium near the tube-well site, inside the MA Stadium but since then, 14 years have passed the stadium is still incomplete.
“Ironically the Kabaddi stadium still lacks all modern facilities including matting as well as indoor hall for organizing Kabaddi matches as per modern facilities”, sources said, adding that across Jammu province, there is only one coach for Kabaddi, whereas according to requirements, there should be atleast one coach of Kabaddi at district level.
A Kabaddi player while expressing anonymity said that at present, across the country and world, Kabaddi matches are organised inside indoor halls that too over the matting but it is only in Jammu’s stadium, Kabaddi matches are still organised under the open sky, on ground that too without mats. In Jammu and Kashmir, huge talent is available and many good players are presently playing State-level tournaments but not a single had got selected for Kabaddi league organized across the country, he added.
“The lack of facilities such as good indoor stadium could be a reason for low performance of state players”, another player alleged.
Jammu and Kashmir Sports Council (JKSC) is learnt to be mulling that the Kabaddi stadium is developed on the pattern of other States so that the Kabaddi matches may be organised inside the indoor hall and in this regard a Detail Project Report (DPR) has been finalized. Soon the council is going to float tenders for modernizing the Kabaddi Stadium, an official informed, pleading anonymity.
An official revealed that recently the Jammu and Kashmir Council had spent Rs 13 lakhs for the development of Kabaddi Stadium through the funds sanctioned by Jammu and Kashmir Infrastructure Development Financial Corporation (JKIDFC) under languishing projects.
Under this scheme- the council had constructed a pavilion along with boundary wall, sitting tiers and installed mast lights but the roof’ construction is still under consideration of the authorities. The matting could only be done once the roof will be in place, the official said.
Divisional Sports Officer, JKSC Ravi Singh said that he was unaware that the matting of ground as well as construction of roof over the ground was under consideration. He further said that only the Engineering Wing could reply over the development.
The Engineering Wing officials pleading anonymity said the proposal of matting and construction of roof is under consideration but the final call would be taken by the Sports Council.