Excelsior Correspondent
UDHAMPUR, Oct 27: A middle aged man from West Bengal, working here as labourer, committed suicide by hanging himself from a ceiling fan hook at his rented accommodation in Pul Mada Chenani.
Reports said that Mukesh Naik (50), son of Dadul Naik, resident of Dhira Line Chanpagudi Nagarkata Talpaiguri, West Bangal, A/P Pul Mada, near Chenani, was founded hanging from the ceiling fan hook under mysterious circumstances.
On being informed by the family members, a Police team from PS Chenani rushed to the spot and shifted the dead body to Sub District Hospital Chenani for the postmortem and other legal formalities.
Cause of provocation in this apparent case of suicide could not be ascertained. Police has registered the case under Section 174 RPC and started further investigation. 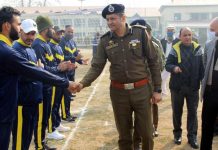