SRINAGAR, Sept 18: Lieutenant Governor, Manoj Sinha today reviewed the functioning of J&K Sports Council & Youth Services & Sports Department in a meeting at Civil Secretariat here today.
At the outset, Commissioner/Secretary, Youth Services & Sports Department, Sarmad Hafeez briefed the Lt Governor regarding the overall sports scenario in the J&K and the achievements of the JK Sports Council and Youth Services & Sports Department in conducting the sports activities, building sports infrastructure, and promoting sports culture in the J&K through a PowerPoint presentation. He also apprised the Lt Governor about the to-date progress of the renovation/up-gradation works at M.A Stadium & Bakshi Stadium.
Taking note of the inordinate delays in completion of ongoing projects, especially the Bakshi Stadium, the Lt Governor passed explicit directions to the officers for completing all pending projects within stipulated timelines and called for making concerted efforts to involve more and more youth in sports to channelize their energies
The meeting was informed about the status of upcoming sports infrastructure, which include 31 projects under PMDP, including 22 multipurpose indoor halls, out of 22 Indoor Halls, 8 Indoor Halls have been completed while 5 Indoor Halls are nearing completion during Oct 2020.
It was remarked that Sports Council was formed with the aim to promote, develop and encourage competitive sports, athletics and cultural activities in a professional manner in the UT with a reoriented approach vis-à-vis sports so that local talent in different sports is harnessed and encouraged to participate successfully in their area of sports at National as well as International level.
Later, the Lt Governor also released Coffee Table Book of J&K Sports Council showcasing its efforts in promotion of sports in the Union Territory through sustained augmentation of sports infrastructure and handholding of local talent.
The meeting was attended by the Advisors to Lt Governor, Farooq Khan and K.K Sharma; Chief Secretary, BVR Subrahmanyam; Principal Secretary to Lt Governor, Nitishwar Kumar; Secretary, Youth Services & Sports, Sarmad Hafeez; Secretary J&K Sports Council, Dr. Naseem Javaid Chowdhary; Director General Youth Services & Sports, Dr. Saleem-ur-Rehman, and other officers.
Meanwhile, international cricketer Suresh Raina called on Lieutenant Governor Manoj Sinha.
The celebrity cricketer, on the request of Lt Governor, agreed to set up five schools in Kashmir division and an equal number in Jammu division to train the aspiring cricketers, particularly the youngsters from remote areas of the UT. He revealed that talent would be identified and selected from all regions of J&K, trained by professionals and would be equipped to play at the International level.
The Lt Governor appreciated the gesture of the cricketer. He also informed the latter of the Government’s resolve of developing sports culture in the UT. ‘With sports and education, we shall give a new direction to the talented youth of J&K’, said the Lt Governor.
Raina also met with the Director General of Police (DGP) J&K, Dilbag Singh at Police Headquarters, here and had a discussion about a series of plans of J&K Police for encouraging local youth in honing their sports skills.
The DGP thanked Raina for visiting PHQ and appreciated the commitment of the star player for volunteering his services in youth engagement programmes in the Union Territory of Jammu and Kashmir.
SSP Anantnag, Sandeep Choudhary and AIG (Welfare & Comm.) PHQ, Manoj Kumar Pandith were also present during the meeting. 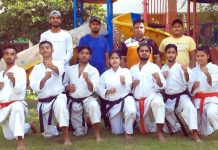 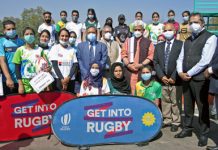 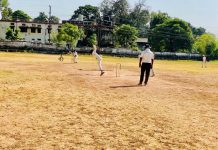