JAMMU, May 1: Lakshmi Cricket Club (LCC) will lock horns with Simula Cricket Club (SCC) in the final match of the Salute to Indian Forces Open Twenty20 Cricket Tournament, on May 5.
The tournament is being organized by Parade Sports Association (PSA) at Parade Ground, here.
The today’s semi-final was played between Lakshmi Cricket Club and Nagrota Cricket Club (NCC). After winning the toss, LCC batted first and scored 124 runs in stipulated 20 overs by losing 9 wickets. Pardeep and Rohan scored 26 each while Dhruv and Sant Baksh scored 16 each. Nipun also added 8 runs to the total.
For NCC, Varun scalped 3 wickets while Darshan, Deep and Rahubir took one wicket each.
In reply, Nagrota Cricket Club failed to chase the target and bundled out in 17.5 overs at a low score of 78. Naresh scored 24, Neefu 21 and Nasir made 10 runs. For LCC, Sameer Khajuria scalped 4 wickets while Nipun took 3 wickets. Dhruv and Rohan shared one wicket each.
Thus, LCC won the match by 46 runs. Nipun was named man of the match.
The match was officiated by Vijay Kumar and Ashok Singh as umpires while Amarjeet Singh was scorer. 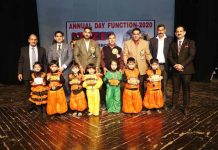 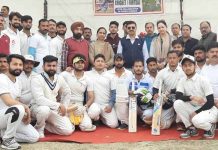 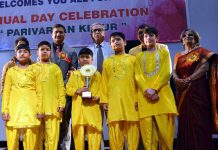 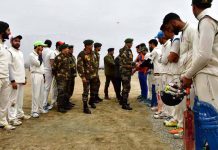 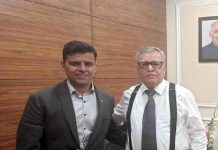