Jammu, Dec 5.: J&K Cricket team of specially abled players defeated Punjab Cricket team of specially abled players in the last league match and entered in the final of Inter State Divyang National Championship which is being held at Bhiwani, Haryana on the occasion of World Disabled Day by the Physically Challenged Cricket Association of India.
Batting first Punjab made 123 runs for the loss of 6 wickets in the allotted 20 overs match. Harjinder and Manpreet Singh were the main batsmen of Punjab who made 52 runs and 42 runs whereas Rahul scored 19 runs.
From the bowling side, Firdouse took 2 wickets while Abhijit, Jagmohan and Nadeem took 1 wicket each for the J&K.
In reply J&K chased the target in 16.5 overs by losing 2 wickets thus won the match by 8 wickets. Mohd Nadeem was the main scorer who made 68 runs whereas Jagmohan with 17 runs and Nikhil with 13 runs were the other batsmen who batted well against the Punjab team.
From the bowling side Manpreet and Rajinder shared 1 wicket each. Nadeem was declared man of the match.
JP Dalal Agriculture Minister of Harayana, SP Ajay Singh Shekawat of Bhawani and Dharambir Singh Member Lok Sabha were the VIP guests in the inaugural function of the tournament and during the inaugural function JP Dalal Minister of Agriculture announced Rs. 1 lack for all teams participating in the tournament.
Rajesh Gill former Ranji Player, Member of Indian Cricketers Association, and mentor of J&K Physically Challenged Cricket Team greeted the J&K Team for the great performance shown in the tournament and for entering in the Final. Other executive members of the J&K PCCA includes Ashish Singh (V. President), Sanjeev Mahajan and RP Singh (Sports Advisors) also greeted the Captain for performing exceptional in the last league of the tournament. 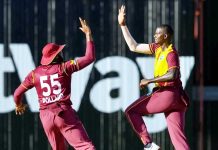 India positive and ready to discuss with Pakistan expansion of pilgrimage sites, mode of...