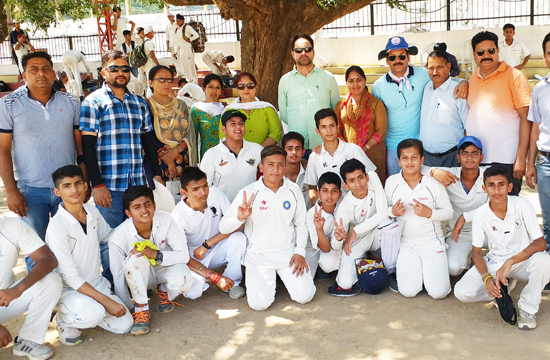 Excelsior Sports Correspondent
JAMMU, June 6: Outplaying their rivals in close contests in the semifinals, Jammu Zone and Bhalwal Zone sealed berth in the finals of the ongoing Jammu District Inter-Zonal Under-17 Boys Cricket Tournament, being organized by the Department of Youth Services and Sports at Parade ground here.
Now, the two teams will lock horns with each other in the summit clash at the same venue tomorrow.
Earlier, in the first semifinal, Zone Jammu defeated Zone Satwari by 23 runs, while in another semifinal, Zone Bhalwal trounced Zone Gandhi Nagar in a thrilling contest by 2 runs.
In all, 448 boys drawn from 14 Zones of Jammu District took part in the U-17 and U-14 Boys Cricket and Tug of War competitions.
The competitions are being held under the patronage of Shiekh Fayaz Ahmad, Director General, Youth Services and Sports and under the overall supervision of Madan Lal, Joint Director. Chanchal Kour, DYSSO Jammu is the Organizing Secretary of the tournament.
The main objective of the tournament is to select the teams of District Jammu for Inter District Division Level competitions.
Meanwhile, in Under-14 Boys Cricket Tournament final held at Govt High School Satwari Jammu Cantt yesterday evening, Zone Gandhi Nagar defeated Zone Bishnah by 9 wickets to win the title.